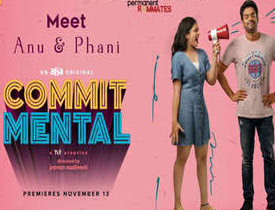 Commit Mental is one of the latest OTT shows that has impressed many with its trailers. The web series directed by Pawan Sadineni has hit the small screens today on AHA. Let’s see how it is.

Phani(Udbhav Raghunandan) returns from the US and reaches his girlfriend, Anu’s(Punanrnavi) house, and suddenly proposes marriage to her. A very reluctant Anu says yes but has commitment phobia as she is just settling down in her job and life. Also, Anu hates Phani’s over-possessive behavior. A small wedding scenario of a couple makes things even difficult for Anu and Phani and they decide not to marry. The rest of the story is as to how a couple who are poles apart in their ideologies solve their difference and end up together.

The web series is the official remake of the hit web show Permanent Roommates. Director Pawan Sadineni and his team have nicely set it up to the urban Hyderabadi city culture. The production values, camera work, and art direction is pretty good and gives a good feel throughout.

But the show-stealer is Udbhav Raghunandan aka Chicago Subbarao the noted Youtuber. He is perfect in his loud role. It takes a bit of time for one to understand Phani’s character. Once the first episode is done you root for him. Udbhav has done a very impressive job and makes things look quite interesting. His chemistry with Punrnavi is also very good.

Punarnavi gets a meaty role and she does well as Anu. She looks cool and is also good at all the frustrating scenes that she goes through with the hero Phani. The emotional angle in the series is good but it could have been better. The scene where the lead pair go to a wedding and understand the seriousness of commitment has been handled well.

The BGM of the show is pretty good and nicely elevates the proceedings. The best part of the series is that the proceedings are easy on you. Each episode is just 25 to 30 minutes which makes things quite good. Director Pawan Sadineni does an impressive job with his taking. He does not go below the belt by making things vulgar as the series has topics of sex and live in relationship discussed most of the time. His narration is breezy and makes things look simple and sweet.

On the whole, Commit Mental is an urban rom-com that is quite simple and sweet. Though the story is routine and lead pairs’ characters grow on you slowly, the effortless narration by Pawan Sadineni and light-hearted comedy make this series a breezy watch.