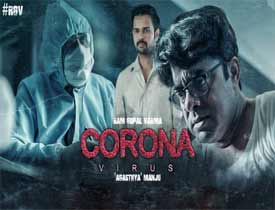 Continuing the trend of reviewing shows and films on OTT, today, a Telugu film called Coronavirus has hit the big screens. The film is also available on RGV world and let’s see how it is.

The film starts with a fight between Rani(Dakshi Guttikonda) and her mother in law. An upset Rani tells her husband that she wants to go back to her parents. This is the time her father in law(Srikanth Iyengar) gets a call about the lockdown situation in the country. Everyone gets shocked to know about the restrictions and upon this, Rani’s sister-in-law, Shanthi(Sonia) falls sick. This creates panic in the house and what will the family members do to survive the virus forms the rest of the story.

The Corona scare is introduced well into the proceedings. The manner in which the main characters react to this pandemic is nicely showcased by the director. Dakshi Guttikonda is amazing in her role and does a good job. The film starts with her and the young actress holds her role quite well. She looks like a promising talent and can go a long way.

Noted actor, Vamsi Chaganti is also neat in his role. But it is Srikanth Iyengar who steals the show. He as a frustrated person handling the Corona situation has done quite well in the film. His facial expressions have nicely been captured by the director. The manner in which each family member gets scared of others has been showcased well.

RGV chooses curious subjects in all his films but off late, he leaves his subjects and narrates something else. His assistant Agastya Manju has also done the same in this film. He establishes the conflict well but post that, the film drags like never before. There are many scenes that lag in the film.

The same scenes are repeated from various angles. The issue of fear is dragged a way bit too much and after a point bores the audience. As the pandemic situation has changed in India, the climax looks weird. Too many things are mixed up in the film making things outdated in many areas.

The production values of the film are ok. The music is bad and the BGM was also loud. Dialogues are decent and so was the production design. Editing is bad as many scenes could have been chopped off. Coming to the director Agastya he has done a poor job with the film. He takes a simple point and drags it forever. Also, as there is no seriousness about Corona in many, the plot and proceedings look boring.

On the whole, Coronavirus has an interesting setup but fails with its execution completely. The film looks outdated as of now with Covid’s scare going down now. There is nothing special that is showcased in this film and ends as yet another silly project from the hands of RGV.