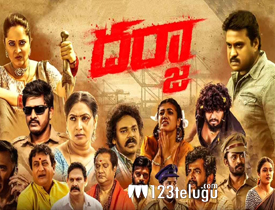 Well-known anchor and character artist Anasuya Bharadwaj turned antagonist for the film Darja which has Sunil in another key role. The film hit the screens today. Let’s see how it is.

Kanaka Maha Laxmi (Anasuya Bharadwaj) is a notorious criminal who does liquor business (Gudumba) in Bandar. She keeps killing everyone who comes in her way. On the other side, we get to see two brothers Ganesh and Ranga (Arun Varma, Shammu), who will be enjoying their love life with Pushpa and Geetha (Sireesha Nulu, Aqsa Khan) peacefully. Things take a drastic turn when Ganesh dies. Siva Shankar Paiditpati (Sunil) takes charge as the new ACP to control the situation. Who killed Ganesh? Are Geetha and Pushpa involved with the murder? What is the link between Ganesh’s family and Kanaka Maha Laxmi? What is the role of Siva Shankar Paidipati? The answers can be known only on the big screen.

Sunil is undoubtedly the biggest asset of the film. Even though he enters a bit late, he packs a punch with his performance as a ferocious cop and does a superb job in fight sequences. He carries the entire latter part on his shoulders.

Anasuya Bharadwaj is perfect as a notorious criminal. Her body language and attitude suit the role aptly. She gave a very good performance as the antagonist and her screen presence is just lit. The interval bang is decent. The second half had a few good moments with the twists unfolding one by one in an interesting way.

Writing is one of the huge drawbacks of film. The screenplay is too boring and confusing in the initial hour with too many subplots. Director placed the main story in the second half, but the damage is already done with the bad first half.

The love track of the two brothers is boring and isn’t engaging at all. There are many songs placed in the film that don’t fit into the narrative. The emotional scenes are not convincing and lack novelty.

There are a lot of unwanted scenes in the film that test patience. The film is dragged for no reason and the editor could have chopped off 10-15 minutes. We can feel the shades of other films in most of the scenes.

The comedy in the films looks so forced and doesn’t evoke any laughs. There are several other artists in the movie but none makes a mark.

The music director Rap Rock Shakeel did an okayish job with his music and background score. He could have done an even better job though. Cinematography is good as it captures the coastal locations beautifully.

Coming to director Saleem Malik he failed big time in his narration with many irregular and unwanted sequences making the film so boring. Especially in the first half the screenplay goes for a toss with scenes having no connection. His treatment is outdated too.

On the whole, Darja is an unimpressive old age revenge drama. The film has a bad first half followed by a slightly better second half. Very good performances by Sunil and Anasuya could not save the film. The writer Nazir and the director Saleem Malik need to be blamed for executing the proceedings in a boring and disengaging manner. You can wait for any other good film to watch this weekend.