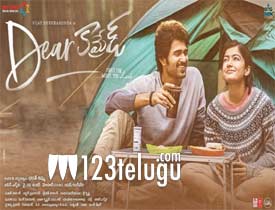 Dear Comrade is a film which has created a superb hype in the last few days. After a good round of promotions, the film has finally released in all the four South Indian languages today. Let’s see how it is.

Bobby(Vijay Devarakonda) is an essentric student leader who gets into all sorts of troubles. He falls in love with Lilly(Rashmika) and just when they are about to settle down, Bobby’s never changing aggressive nature causes a rift between them and the couple breaks up. Three years pass by and Bobby accidentally meets Lilly again and sees her in a devastated stage admitted to a hospital. Why is Lilly admitted in a hospital? What happened to her? And how does Bobby help her come back to normal is the whole all about.

The first thing that hits you in Dear Comrade is the remarkable chemistry of the lead pair. Rashmika and Vijay are just inseparable and hold the film together with their stunning act. It is because of the bond and emotions that they showcase, this film looks special.

Vijay Devarakonda underplays his aggression and uses it perfectly according to his character in the film. He as Bobby showcases superb emotions in the second half and wins you over with his performance. The social aspect and women empowerment angle has been dealt well in the film and will connect to many.

But what stays even after you come out of the theater is the character of Lilly. Rashmika steals the limelight with her career best performance. She is cute and beautiful in the first half and at the same time is vulnerable and broken in the second half. All these emotions have been showed in a spectacular manner by Rashmika. She along with Vijay make the film work in many ways.

The first half of the film has good romance which will attract the youth. The guy who did the role of a cricket selector was superb in his character. The supporting cast is very good as everyone has given a superb performance. Credit should definitely go to music director Justin Prabhakaran who has taken the songs and visuals to another level.

One of the biggest drawbacks of the film is the length. The film needs serious editing as the makers should cut atleast 10 to 12 minutes to make things better for the audience. The story point of the film is nothing new as a new social concept has been added to a old line.

This is not an out and out Vijay Devarakonda film as his role is bit subdued and goes with the flow of the film. So all those who expect him to explode will be disappointed. There are no major twists as the proceedings are predictable and narration is slow at times.

As said earlier, the music of the film is top notch as all the songs are set superbly into the narrative. Not one song feels disturbing. The BGM is also soothing and lifts the film. Production values of the film are top notch as the camera work showcases the time period in a stunning manner. Rashmika has been styled quite naturally as her no makeup look is spot on. The lyrics are meaningful and production design is also very good.

Coming to the director Bharat Kamma, he does not get carried away with the star power of Vijay and Rashmika and uses them just as the characters in the film. He extracts superb performances from them and drives the film through his content and emotions. His way of showcasing the romance is quite impressive in both the halves. If he would have edited the film a bit and narrated it in even more gripping manner, things would have been impressive.

On the whole, Dear Comrade is not the routine love story which you see on a regular basis. It is filled with emotions and shows how one needs to fight for what they believe in and support their partners no matter what. A realistic love story, superb performances from the lead pair and well narrated social issue are basic assets of the film. The masses will find the viewing a bit difficult because of the length and slow narration but otherwise, this film has all the elements which make up for a decent watch this weekend.