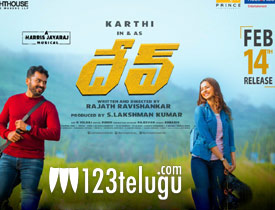 Karthi is back with another film of his called Dev. Starring Rakul Preet as the female lead, this film has hit the screens today. Let’s see how it is.

Dev(Karthi) is a fun and adventure loving guy who forcefully gets in touch with Meghana(Rakul Preet), a rich business woman who has no time for love. At first, Meghana avoids Dev but slowly falls for him. The twist in the tale arises when Dev starts having issues with Meghana and her possessive attitude. Rest of the story is as to how Dev and Meghana dealt their differences and get back together.

Karthi looks super sharp in his modern get up. His hairstyle and charming personality are brought on screen in a lovely manner. Performance wise, he is very good and did a superb job in this film.

Rakul gets a meaty role in the film and dominates Karthi in most of the scenes. She shares a sizzling chemistry with Karthi and is a perfect fit as a rich businesswoman with an idealistic attitude. The guy who did the role of Karthi’s friend was just about okay. Rest of the star cast did not have much to do in the film.

One of the biggest drawbacks of the film is that the film has absolutely no story at all. There is no conflicting point for the entire first half except for scenes featuring Karthi and his friends urging him to fall in love are showcased in a boring manner.

The director takes for ever to bring love between the lead pair and the basic conflict is brought only in the pre climax. The romance is boring, the build up to the plot is wayward and nothing works in the film.

Upon this, there is no emotion in the film at all. The so called family and romantic emotions look forced and do not generate any interest. Pace of the film is slow and mundane that you feel like walking away from the theatre many a time during the screening.

As the film is made on a budget of 50 crores it looks very rich in every frame. But all that is gone waste as the narration is horrible. Director Rajath Ravi Shankar has literally killed the film with his silly and idiotic execution. It is surprising to see how Karthi even accepted the film.

Music by Harris Jayraj is good but all his songs are lost in the narration. Lyrics are below par and the dubbing done for major characters is horrible and looks out of hand. Camera work is neat but the locations are not utilized properly.

On the whole, Dev is a disappointing romantic drama which fails to click. It is hard to understand how Karthi even agreed to this project which lacks the basic soul. The story is weak, conflict is missing and there is no flow in the proceedings. Except for Rakul and Karthi’s chemistry, this film has nothing going its way. So, watch it at your own risk.