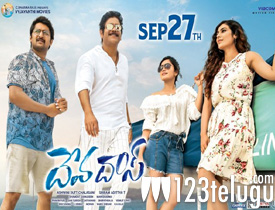 Deva Das is one film which has created a decent buzz for itself in the past few days. After a good round of promotions, the film has hit the screens today. Let’s see how the film turns s out to be.

Das(Nani) is a sincere doctor who gets kicked out of a corporate hospital and starts working at a private clinic. On the other hand, Deva(Nagarjuna) is a dreaded don who is on the run. During a gun fight with his enemies, Deva gets hurt and reaches Das’s hospital and gets treated there.

This small meeting between Deva and Das turns into a deep friedship. As time passes by, one crucial incident regarding Deva and his mafia background causes a rift in the friendship. Rest of the story is as to how Das changes Deva into a good man and sets things right.

As expected, one of the biggest highlights of the film is the bromance between Nagarjuna and Nani. Whenever the star heroes are on screen things look quite lively and entertaining. The star duo evoke good comedy and their chemistry will impress the audience completely.

Nagarjuna looks super fit and it is nice to see him give equal space to Nani and still come up with a top notch performance. Nag is especially good in the second half where his story has a good depth.

Nani is once again a show stealer as his innocent doctor’s role is the main backbone of the film. Nani is quite natural in his role and the manner in which he evokes comedy with his funny yet expressive emotions is one of the biggest highlights of the film.

The film looks grand and the emotions catch on quite well during the last half an hour and this ends the film on a good note. Rashmika and Akanksha perform well in their supporting roles. Murali Sharma, Naresh and comedian Satya are neat in their given characters.

The story of the film is just about okay as the makers have put more emphasis on the star value of Nani and Nagarjuna. Even though the chemistry between Nag and Nani is good, the director should have added more comedy between the duo.The small time twists that are showcased are a bit predictable and have not much depth in them.

There is nothing much going on in the first half as forced scenes and unnecessary mafia setup are highlighted. The film starts its main story only before the last ten minutes at the interval point.

Production values by Vyjayanthi Movies are top notch as they have not compromised on the visuals. Camera work is great as it shows the film and star heroes in a superb manner. Music by Mani Sharma is below par as some good hit songs would have helped things even better. Lyrics are good and the whole set up of the film looks cool. Editing is just about okay as atleast ten minutes in the first half could have been chopped off. Nagarjuna has been styled quite nicely in the film.

Coming to the director Sriram Aditya, he had a massive responsibility of handling both the stars and he has done an okay job. Sriram had plenty of situations where he could have generated hilarious fun but he did not make use of it and showcased the proceedings on just a simple note. However, he handled both the star’s well and extracted good chemistry from them.

On the whole, Deva Das is a decent multi starrer which clicks because of Nagarjuna and Nani’s good screen presence. Story wise, there is nothing new and the first half is also ordinary. But things change from the second part as the good dose of emotions and interesting ending work for the film. All you need is to keep your expectations in check and enjoy Nani and Nag’s unique bromance unfold on screen.