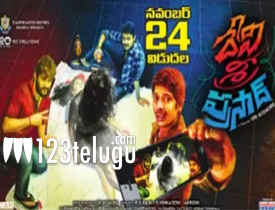 One small budget film which is carrying a decent buzz in this week release list is Devi Sri Prasad. Directed by debutant Sai Kishore, this film has hit the screens today. Let’s see how it is.

Devi Sri Prasad’s story is all about three close friends Devi (Bhupal Raju) Sri(Dhanraj) and Prasad (Manoj Nandam). When everything seems to be going well in their life, a major car accident of a reputed heroine Leela (Pooja Ramachandran) leads to a drastic change in their behavior. Who is this Leela? What is her backstory? and What change does she bring in these three friends life? To know this, you have to watch the film in theaters.

Lead actors Dhanraj, Bhupal Raju and Manoj Nandam have given a decent performance in their respective roles. Especially, Bhupal Raju’s performance as a wicked guy in tense scenes brings a depth to the proceedings to an extent.

Pooja Ramachandran is good looking and gave an okay performance in the given crucial role. Posani Murali Krishna and comedian Tillu tried to evoke a few laughs here and there.

One of the major drawbacks of the film is its illogic narration. The director has taken many cinematic liberties to narrate the film with an uneven screenplay and unexciting proceedings.

Though the film’s genre is a crime thriller, the director should have injected enough comedy episodes into the proceedings to entertain the audience to an extent.

Even though the twist that has been revealed in the climax looks good, you get a feeling that the whole proceedings were just dragged to showcase that twist. The logic goes missing in many scenes.

As said above, director Sai Kishore’s uneven screenplay and illogical narration will disappoint the audience big time. The cinematography is okay and apt to the film’s mood. Editing is good as the short and crispy runtime is a major sign of relief for the audience. Music by Syed Kamran is impressive as his background score gives depth to the proceedings to an extent. Production values for this low budget film are okay.

On the whole, Devi Sri Prasad is a silly crime story which lacks proper depth in the proceedings and narration. Though the first twenty minutes raise curiosity, rest of the proceedings completely sidetrack and make this a logicless film from there on. You can safely ignore this film and look out for some other options from the rest of the releases this weekend.