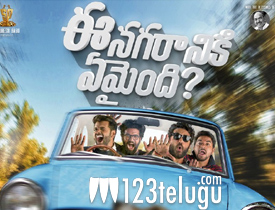 Tharun Bhascker is back with his second film Ee Nagariniki Emaindi. There is a decent buzz surrounding this film and we bring you the review after watching the premiere show of the film. Read on to see how the film is.

The story of the film is quite simple as it is based on the lives of four friends who meet after a long time and end up in Goa because of a weird incident. There, one more small incident leads them to enter a short film making contest. Rest of the story is as to how the friends fight, clear their differences and finally reunite and feel the precious moments of their friendship.

Tharun Bhascker once again chooses a youthful script for his second outing. One can say that rather than having a story for the film, he just showcased how close friends go about in life before they get married. The way he has written all his characters is where the film clicks. Every character’s story and emotion is spot on.

One of the biggest advantages is the young star cast who does a fabulous job. If it was Priyadarshi for Pelli Choopulu, this film has Abhinav Gomatam as the center of attraction here. His comedy works big time and he is the one who will pull the crowds to the theaters. Abbhinav’s dialogue delivery and the way he generates fun in the drinking scene was too hilarious.

Vishwak Sen who does the role of the man in a break up is pretty impressive. One of the major assets of the film is the chemistry between the four friends. They will surely remind you of all your friends and the moments you have spent with them.

Anisha Ambrose is cute in her small role. The comedy in the second half works quite well and holds the film nicely. There are some good emotional moments and how the friends stand for each other has been showcased impressively. The taking of the film is quite cool as every scene and set up looks rich.

The film takes its own sweet time to get into the actual mode. All the characters are introduced on a very slow note during the first half and this is where a section of the audience might get a bit bored.

Also, there is no major conflict point in the film as it is heavily inspired by Zindagi Na Milegi Dobara and Dil Chahtha Hai. The love track is a bit dull and the drama in certain scenes is missing.

The camerawork is absolutely stunning as the film looks quite posh in every aspect. Special mention to the dialogues as they have been written with a lot of wits and leave the audience in splits in many areas. Music and background score by Vivek Sagar is impressive and takes the story forward nicely. Production design, costumes and the entire production values by Suresh Productions are top notch.

Coming to the director Tharun Bhascker, he created a new wave romantic comedy with Pelli Choopulu and with this film he brings the buddy comedy genre to Tollywood. He keeps things simple and focuses on the fun and emotion part between the group of friends which is common in the youth. The way he has written the subplots for friends and generated good comedy throughout was impressive. Though his Pelli Choopulu magic was missing in the love track in this film, his overall narration was good and will surely go well with the youth.

With Ee Nagarainiki Emaindi, Tollywood steps into the buddy comedy genre which has been rarely explored. This movie has no great story but is filled with a lot of fun and precious moments which a group of buddies share in real life. The film will surely click with the younger generation as it has good relatable entertainment. On the flipside, this film is clearly not for every section of the audience who are used to the regular set up. Barring that, we can say that Tollywood is changing rapidly and churning out these interesting films one after the other and this film is one of those. As said in the posters, do watch this film with your friends and have a good time. You will not be disappointed.