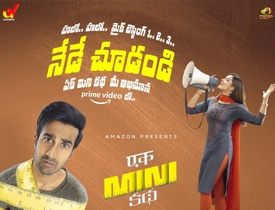 As the theatres are shut down, one more film named Ek Mini Katha has made its way to the OTT platform today. The film is now streaming on Amazon Prime. Let’s see how it is.

Santosh (Santosh Shobhan) is a young man who has size issues with his private part. With such a problem, he decides all sorts of things to get better. But seeing his crazy behaviour, his dad gets Santosh married to Amrutha(Kavya Thapar). But Santosh who is not ready for family life tries all sorts of tricks to delay his physical relationship. Why is he so nervous? What all did he do to espace the situation? and what happened in the end? That forms the rest of the story.

Young actor, Santosh Shoban has done films previously but Ek Mini Katha is surely his turning point. With such a delicate subject, Santosh proved that he has the talent to prove himself as an actor. Be it comedy, frustration, and emotions, he has it all and delivers a standout performance, and is the mainstay of the film.

Kavya Thapar looks gorgeous and also acts well in the film. Her chemistry with the hero is spot on and the couple look good on screen. Comedian Sudarsha gets a good job and is superb as a hero’s friend. This film will be a good break for him. Saptagiri is okay and does well but his role looks forced in some scenes.

Brahmaji changes roles and plays the hero’s father and he is good with his comedy. The actor who played the role of a guy with suicidal symptoms was pretty good. The first half of the film has good comedy and content. The second is dragged a bit but the film is ended well.

The second half gets dragged out scenes in plenty. Just for the sake of comedy, so many characters and situations are created which makes the scenes look forced. Shraddha Das does her role well but her character does not add much to the film.

UV Concepts have made this film which has amazing production values. The camerawork and the way Hyderabad is showcased is quite amazing. The film has an urban and vibrant feel and looks pleasing. Music is amazing as the songs have been composed and shot well.

Coming to the director Karthik Rapolu, he has done a pretty good job with the film and is a director to watch out for. Even though the basic theme and content are bold, he did not make the film look vulgar in any which way and this is where his talent is proved. Barring some over-the-top family scenes in the second half, he adds good humor in a timely manner and ends the film on a very convincing and happy note.

On the whole, Ek Mini Katha has a very bold subject for the Telugu audience. But director Karthik Rapolu succeeds in narrating it in a neat manner with decent comedy. Though this film is for the adult audience and gets a bit dragged in the second half, it has enough material in it and ends as a time pass watch during these tense times of COVID 19.