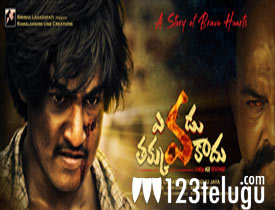 Producer Lagadapati Sridhar’s son, Vikram Lagadapati has made his debut with the film Evadu Thakkuva Kaadu. The film is out for public viewing today and let’s check how it turns out to be.

Teenage orphans, Madhu(Vikram) and his three friends Raja, Banda, and Chinna lead their life by doing odd jobs in Monda market. One fine day, with the help of a lady called Pooranakka, they open a hotel in the market area. When the food business starts progressing, they start facing hurdles from the market head Rayudu and his gang. Rest of the story is how these teenage guys take on Rayudu and safeguard their hotel.

Vikram Lagadapati is decent with his acting and showcased good ease in the dance moves. All the teenage guys who acted in supporting roles are okay with their acting. A few scenes between the friend’s gang and their lifestyle are projected in a realistic manner.

Heroine Priyanka Jain is cute as a school going, teenager. The lady, who acted in Pooranakka’s role is good with her performance in emotional scenes. Yet another girl in the friend’s gang did an okayish job.

Noted comedian, Adhurs Raghu evokes good laughs at regular intervals in both the halves. A special song shot on Vikram which comes during the end titles is presented in a lavish manner.

The opening scenes in the film promise an intriguing drama but from thereon, the film shifts to Monda market with same old style narration. The film showcases the rise of teenage guys post the interval block and these scenes remind us of Chatrapathi.

At one point in time, we feel it like watching a childish film as the narration lacks seriousness in it. A few unwanted scenes are forcibly inserted in the film which totally disturbs the flow and makes the audience look at the exit doors.

Director Raghu Jaya’s story has nothing new but he could have concentrated in writing a better screenplay. His taking is completely outdated as most of the time we feel like watching an old film. Editing work is not up to the mark as the film can be chopped off for 15 minutes easily. Cinematography is decent as the rustic favor in the film is brought out in a nice manner.

Music is a big letdown as none of the songs and background score worked. Surprisingly, production values by a big banner like Rama Lakshmi Creations are of low standards.

On the whole, Evadu Thakkuva Kaadu is the story of four orphans and their fight for survival. Though the point looks decent, the narration part is totally unengaging with routine scenes and silly narration making this film a tedious watch this weekend.