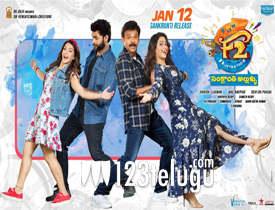 F2 has been in the news as it has the crazy combination of Venkatesh and Varun Tej playing main leads. The comedy caper has hit the screens today and let’s see whether it lives up to all its expectations or not.

Venky(Venkatesh) is a frustrated husband who starts hating his wife(Tamannaah) just after six months of his marriage This is also the time when Varun(Varun Tej) falls in love with Honey(Mehreen) who is Venky’s crazy sister in law. This leads to more problems for the frustrated men.

After a point in the film, the frustration gets to the duo so much that they leave their loved ones and escape to Europe. There, they face a deadly situation and get stuck in even bigger problems featuring their wives. Rest of the story is as to how they come out of their problems and win their love back.

Venkatesh is back in top form and is hilarious in the film. His facial expressions and the manner in which he evokes the Bakra comedy is quite good. It is nice to see him in a lovable role after a long time which family audience will easily connect to.

Credit to should go to Varun Tej for holding his fort in front of a senior artist like Venky. Varun not only had to get his Telangana slang right but had to also evoke slapstick comedy which he did quite well and gelled with Venky superbly.

It was good to see Y Vijaya and Annapurna in good roles after a long time. Tamannaah looks gorgeous in the film and the surprise package is Mehreen who evoked silly expressions and comedy superbly.

The dog episode is hilarious and will evoke huge cheers in the theater. The first half is filled with a lot of fun moments which are simple and funny. Prakash Raj was good and Vennela Kishore gives his comic touch to the film in the end. Rajendra Prasad is also neat in his role and provides the needed laughs.

There is no proper story in the film as the plot is water thin. Also, the conflict point with which the heroes separate from their loved ones is not established well.

After a hilarious first half, the tempo of the film drops down and slows the film to an extent. The comedy evoked is just about okay during this time as the logic misses out in many places. A song in the climax disturbs the flow of the film at the crunch situtation.

Music by DSP is just about okay and so was his background score. Dialogues are hilarious and director Anil has used them in right situations. Production values by Dil Raju are top notch as the film looks rich and the Europe visuals have been showcased in a good manner by the camera department. Editing is decent but one song in the second half could have been avoided.

Coming to the director Anil Ravipudi, he has done a good job with the film. He has used Venkatesh’s potential to full use and created good comedy at regular intervals. He knows the audience pulse well and narrated the film is a simple and fun manner. If he would have added some more logic and fun in the second half the output would have been superb.

On the whole, F2 is a happy fun film which can be watched with your entire family. Vintage Venky is back and he makes sure that there is all-round entertainment in the film. There is no proper story or logic in the second half but this a kind of a film which should be enjoyed keeping aside all those minor issues. As the Sankranthi season is on, the film will get a wider reach as it has simple and neat fun which will impress many. Go watch it.