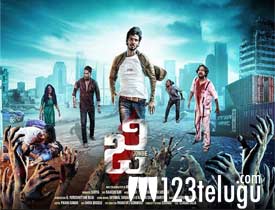 Apart from Zombie Reddy, yet another small film titled, G- Zombie in the reputed zombie genre has hit the screens today. Let’s see how it is.

In order to reduce the widespread of contamination diseases, a medical student named Sara(Divya Pandey) along with her co-students decides to develop an immunity booster vaccine with the approval of their college dean. In the entire process, they take help from a doctor named Rudra (Aryan Gowra) and start trials on a Captial punishment imposed criminal. As a part of their research, the team injects the vaccine but to their bad luck, the vaccine fails and the person turns into Zombie. It starts attacking the other medical staff and in this horrible situation, how does Aryan Gowra react and saves his team members? That forms the rest of the story.

Looks-wise, hero Aryan Gowra is decent and has a good personality. His acting is okay and did whatever he could do best for the film. Heroine Divya Pandey impresses with her cute looks and her glamorous appearance in a few episodes will attract the youth audience.

A few thrilling scenes during the zombie attacks are executed decently. All the medical staff, who turn as zombies are decent with their appearance and bring depth to the proceedings in the second half.

Though the film looks is a zombie movie, the basic plotline lacks depth in it with unconvincing episodes. The core point has not been established in a proper way due to which the entire of the proceedings falls flat and unengaging.

The execution lacks soul and has many loopholes. Logic also goes for a toss and that is shown in the way the vaccine is given to the key character. The love track between the lead pair has no proper feel in it and comes as a speed breaker in the narration.

The film was directed by Aryan Gowra in association with a lady named Deepu. Though their idea of making a film in the zombie genre is appreciable, the story and screenplay lack proper punch in them. As the duo decided to make a film on the zombie genre, they should have spent enough time is presenting the film in an entertaining way.

Editing work for the film is decent as the runtime is locked less than 2 hours. Cinematography work is okay as the night mood scenes are picturized naturally. Music is decent as the background score in the crucial second half engages in parts. Production values for this low budget film are okay.

On the whole, G- Zombie is yet another film that struggles with its writing and narration part. Though bringing the famous zombie genre to Telugu is a good idea, the spineless proceedings make the film a below-average fare. Ignore it this weekend.