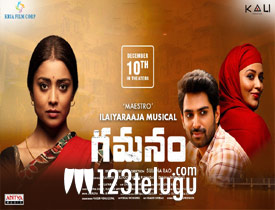 Gamanam is a film that has been promoted a lot in the last few days. The film directed by Sujana Rao has been released today. Lets’s see how it is.

The film is based on three different stories. The first story has Shriya Saran playing a deaf mom who is waiting for her husband to come back from Dubai. In the second story, Ali played by Shiva Kandukuri dreams of making it big in the cricketing field. The last story features two homeless kids whose aim is to buy a cake and celebrate their birthdays. This is also the time when heavy floods create havoc in Hyderabad. How all these different stories face this deadly situation and what happens to them is the basic story of Gamanam.

Gamanam is Shriya’s comeback project and she is exceptional in the film. She as a deaf and helpless mom does quite well in her role. The inner turmoil that Shriya’s character faces is showcased well by the star heroine. Priyanka Jawalkar is good as Zara but gets a limited screen presence.

Young actor, Shiva Kandukuri plays an aspiring cricketer quite well. Shiva gets ample scope to emote and he is good in all the emotional scenes. Senior actor Charu Haasan is neat in his emotional character. The young actors who played homeless kids were very good.

The second half is filled with scenes related to floods and the emotions that each of the characters goes through during this time have been showcased on a decent note. The production design and the way Shriya’s episode of getting stuck in the floods has been designed well.

By looking at the promos, one would assume that the director will somehow connect the three stories. But that does not happen. The first half is dull and the drama showcased lacks sheen.

Also, one of the biggest drawbacks of the film is the slow pace. The film takes forever to enter into the main conflict point. Also, the emotions showcased between the key characters are not established properly in the first half.

The film’s narration is jaded as the climax is filled with unnecessary thrills. Also, it is hard to understand why such a noted actress like Nithya Menen was there in the film. The film does not move you emotionally even though the plot had good scope for it.

The production values of the film are pretty good and showcase the three different stories in a wonderful manner. The camerawork by Gnana Shekar needs a special mention as the old city visuals are impressive. Dialogues are good and so were the music and BGM by legendary Ilaiyaraaja. However, editing could have been better.

Coming to the director Sujana Rao, her story idea, backdrop, and characterizations are good but her narration was very dull. The required conflict is also not established well. The problems showcased do not create much impact on the audience and the slow pace also plays a spoilsport.

On the whole, Gamanam has a good backdrop but is marred by dull narration and slow pace. Shriya Saran is the pick of the star cast and does her role on an impressive note. Apart from that, there is nothing much the film showcases and ends as a below-par and dull watch this weekend.