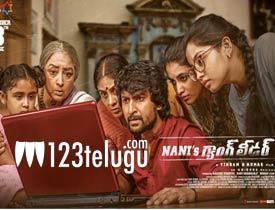 Gang Leader is Nani’s first collaboration with the super talented Vikram Kumar. The film is a fun revenge drama and has hit the screens today. Let’s see how it is.

A crazy bank robbery happens in Hyderabad and 300 crores are robbed. But after a while, an old lady(Lakshmi) forms a gang and approaches Pencil Parthasarathy(Nani), a crime novel specialist for help. Initially, Pencil ignores the gang but later decides to help them. Who are these women? What do they have to do with the bank robbery? How will Pencil help them? and where does Dev played by Karthikeya feature in this setup? To know this, watch the film on the big screen.

The setting and concept of the film is quite novel and is devoid of the regular commercial aspects. Vikram Kumar has given this film a new angle as he has induced good fun in the narration rather than giving it a serious tone.

Nani has become like old wine these days as he keeps getting better with every film of his. His comedy quotient is tapped superbly by Vikram as he generates good fun though Nani’s role. Most importantly, Nani strikes a superb balance between the humor and seriousness in the film which was quite necessary.

Priyanka Arul Mohan makes an impressive debut and is quite beautiful in the film. All her scenes with Nani and romantic track is perfect. Senior actress Lakshmi gets a meaty role and evokes good fun along with sentiment in the end. Saranya Mohan is a superb performer and proves it once again with her comic act in the film.

Last but not least, hero Karthikeya nails it as the bad guy. He has superb screen presence and if chosen his roles quite cleverly, he can go a long way. He as Dev is stylish, aggressive and does a neat job in his key role. He brings a lot of depth to the film. Vennela Kishore’s gay comedy is good and evokes good laughs.

The climax of the film is wrapped up in no time as the villain is finished with just a simple fight and ending. Not that it is bad, but the manner in which Vikram Kumar generates suspense till the pre climax, one would expect something special in the climax which goes missing.

The tempo drops a bit in the second half and the twists showcased during this time are predictable enough. The screenplay during the last ten minutes could have been even more gripping. Karthikeya’s rags to riches story is not clearly elevated.

Production values of the film are top notch as the crime scenes and revenge setup are showcased well. Camerawork by Cuba is top notch as the film has a specific tone for the crime backdrop. Music by Anirudh is decent but his BGM is very impressive as it elevates the film quite well.

Most of the film happens in sets and production design needs a special mention as the crime setup and gang’s house look good. Editing is decent but a song in the first half could have been edited. Dialogues are quite fun and the lyrics by Anantha Sriram are superb.

Coming to the director Vikram Kumar, he has once again chosen a novel script and presented it well. Rather than narrating the revenge drama in a serious tone, he adds a lot of humor which goes well with the lady gang and their approach. He keeps the film to the point and does not deviate for unnecessary commercial aspects. But if he had made the ending a bit more interesting things would have been even great.

On the whole, Gang Leader is a crime thriller which is filled with decent fun and crisp narration. Nani leads from the front and is ably supported by some taut performances which hold the film well. The suspense and comedy go hand in hand in the film and if you ignore the slightly dull climax, this film makes up for an engaging watch this weekend.