Review : Ganga – Only for the masses 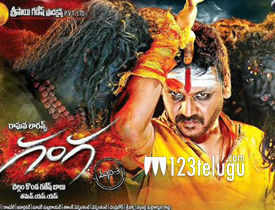 Raghava Lawrence is back with Ganga which is the third part of his famous Muni franchise. Starring Taapsee as the female lead, this film has hit the screens today. Let’s see how it is.

Raghava(Lawrence) is a cameraman with Green TV, and is very scared of ghosts. One fine day, he is posted alongside his creative director Nandini (Taapsee) to cover a story based on a haunting guest house. He along with his unit reaches the place and starts shooting for their television show.

Twist in the tale arises when Taapsee finds a sacred thread and starts experiencing weird incidents around her. Very soon, she gets possessed by an evil spirit which also keeps troubling Raghava. Who is this evil spirit? What does it have to do with Nandini and Ragahava? That forms the rest of the story.

Lawrence scores brownie points for both his direction and acting skills. He is pretty decent in his role and showcases decent comedy timing. All his scenes with Kovai Sarala evoke superb comedy. Taapsee sheds her bubbly girl image and delivers a knock out punch with Ganga. She impresses in a tough role and is the main stay during the first half.

Nithya Menen is pretty good in the role of an handicapped girl and brings a lot of relief whenever she is on screen. The way Lawrence has executed her character in the second half is very good.

First half of the film has hilarious comedy which compliments the well executed horror elements. Once again, Kovai Sarala impresses in her role and gives funny expressions during the horror scenes.

After reaching the interval with a superb twist, Lawrence loses track during the second half. The flashback episode which features Nithya Menen is dragged to the core with some unnecessary songs and sequences. Climax of the film is exaggerated and makes up for a predictable ending. This film is a bit loud and might not go well with the class audience.

Once the twist in the tale is revealed, the film gets completely predictable and bland. The graphics showcased during the climax are over the top and look fake. The flashback episodes which were major highlights in the first two installments is below average in Ganga. Except for Nithya’s performance there is nothing much interesting during this part.

Music of the film is a huge drawback as none of the songs register with the viewers. Background score is pretty decent and elevates the film to a decent level. Dialogues written will go well with the mass audience. Screenplay of the film is superb for the first half but bogs down completely during the second.

With Ganga, Lawrence does not experiment much and sticks to his successful formula. He sets up a brilliant first half and evokes superb comedy from his actors. But the way he handles the second half is below par. He drags the film with unnecessary scenes and complicates the climax.

On the whole, Ganga is a horror comedy which has some interesting moments. Taapsee’s superb performance and a hilarious first half are huge assets for the movie. But a below par second half and a loud climax spoil the fun to an extent. However, this film will see huge openings because of the hype surrounding it and will satisfy its target audience which is the B and C centers.