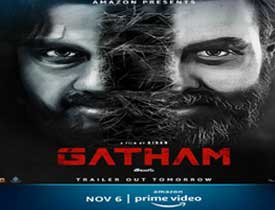 Gatham is one film that has caught the imagination of many because of its interesting trailer. The film is now out on Amazon Prime and let’s see how it is.

Gatham is completely set in the US. Rishi(Rakesh) wakes up in a hospital and finds out that he has lost his memory. His girlfriend Aditi(Pojitha) helps him reach his dad but on their way, their car breaks down all of a sudden. An unknown man(Bhargava Poludadu) comes to their rescue and takes the couple to their home. But to the couple’s shock, the unknown man starts targeting them. Who is this unknown man? Does he have anything to do with the couple? Why did Rishi lose his memory? To know all this, you need to watch the film.

The first thing that impresses you are the decent production values. Gatham has amazing camerawork and effective BGM composed by Sricharan Pakala. Rakesh is effective as Rishi but imitates Vijay Devarakonda with his voice.

Poojitha plays her supporting role well throughout the film. The main man, who plays the kidnapper is quite effective. Though he looks raw in the beginning, he manages things well in his key role

The writing is decent and the twists are also brought in a simple manner. The manner in which the main cast investigates the crime is also handled well. The climax also looks convincing.

There are a few logics that go missing in the film. Whichever character you come across is comfortably a Telugu guy. Care should have been taken in this department to make things look authentic.

The first ten minutes of the film are jittery. As the cast is new and vulnerable, you do not get that serious vibe. Only after 15 minutes, things become interesting. The twists could have been even more effective in the end.

The cops hardly have anything to do in a country like the US and this looks a bit weird in some scenes. Also, once the main twist is revealed, things become a bit predictable in the end.

The technical aspects of the film are pretty good. As said earlier, the visuals are great and so was the music score. Dialogues are decent and the dubbing was pretty much efficient. The production design was good and the screenplay was also okay.

Coming to the director Kiran Reddy, he makes a decent debut. His writing is decent even though there are some key errors in the set up of the film. Though he has a relatively new cast, he narrated the film in a passable manner which is good. But the film has some easy situations and characters to unravel the twists. If this part was made tight, the film would have been even better.

On the whole, Gatham is a psychological thriller that has a decent story. Good visuals and passable twists are the basic assets of the film. If you ignore the slightly amateur cast and watch it with an open mind by ignoring a few logics, this film ends as a passable watch for its simple twists.