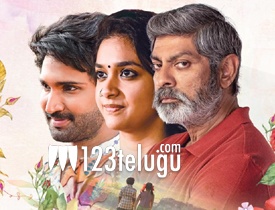 Good Luck Sakhi is the first sports-based movie and the 3rd female-centric movie of Keerthy Suresh. Directed by the National award-winner, Nagesh Kukunoor, this film has been released in theaters today. Let’s see how it is.

Sakhi Pamar (Keerthy Suresh) is a mischievous girl who is treated as the unluckiest in her village. On the other hand, Jagapathi Babu is a retired colonel who returns to his hometown looking for the best shooters. Sakhi’s childhood friend, Goli Raju (Aadhi Pinishetty) introduces her to the colonel. Impressed with her shooting skills, Jagapathi Babu starts training her. What happened during the training? Did Sakhi achieve her goal? Did she become the winner? The answers will be known only if you watch the movie on the big screen.

The phenomenal performance of the National award winner, Keerthy Suresh as Sakhi Pamar, is the big asset of the movie. She lived in the character and looked gorgeous as a village belle. Keerthy’s Chittoor dialect is an added advantage to her performance.

Noted director, Nagesh Kukunoor has come up with a regular sports drama. One expects solid emotions and twists and turns in a sports-based film but surprisingly, Good Luck Sakhi lacks the emotional content.

The film has no strong conflict point that will make audiences sit and watch the movie eagerly. Aadhi Pinishetty’s role has nothing much to do with the story.

Nagesh Kukunoor failed to make Good Luck Sakhi an engaging sports drama. In addition to the slow-paced narration, the movie has some silly scenes in the second half. The climax, which should have been engaging is a big letdown.

This is undoubtedly Nagesh Kukunoor’s weakest movie as he failed to make the sports drama an engaging one. Devi Sri Prasad’s songs and background score are the major highlights of the movie. The cinematography by Chirantan Das is nice. When it comes to editing, there are no flaws and Sreekar Prasad cut the film in a well-manner. The production values by the producers, Sudheer and Shravya are good.

On the whole, Good Luck Sakhi is a slow-paced sports drama that makes you feel bad for Keerthy Suresh. Though the actress delivered her best, it couldn’t help in making the movie a winner. The film has nothing much to offer and even Keerthy couldn’t save it. Good Luck Sakhi failed to hit the bullseye.