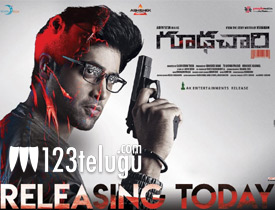 Post the success of Kshanam, Adivi Sesh is back with a spy thriller titled Goodachari. The film has hit the screens today and let’s see how the film turns out to be.

Arjun’s (Adivi Sesh) father, who works for National security agency gets killed by a terrorist group. Taking his father as an inspiration, Arjun also joins the agency after a lot of attempts. After finishing his training, Arjun is assigned a mission. But even before he embarks on it, Arjun is framed in the murder of his own agency bosses. This is the time when Arjun finds out that his mission is even bigger than what he thought and has a personal connection to it. What is that twist and how does he solve the mission is the entire story of the film.

Tollywood is seeing a drastic change in terms of movie making and Goodachari is the latest example as it takes Telugu cinema standard a notch higher. For all those who complain that spy thrillers or action flicks in Hollywood style are hard to make in Telugu, Goodachari is the answer. The film is taut, gripping, filled with ample twists that will keep you throroughly entertained.

Adivi Sesh leads from the front and he needs to be credited for setting a story like this in Telugu nativity which looks totally believable. His writing is crisp as the plot never looks over the top and the logical errors are hard to find. Performance wise too, Sesh has done a superb job. Coupled with his handsome looks, Sesh is superb as the spy and does well in all the action department as well.

Shobita Dhulipala makes a strong debut and is a perfect fit in her role. Her chemistry with Sesh was amazing. Prakash Raj was terrific in the supporting role. Vennela Kishore is impressing with every role of his these days and he will surprise you with his performance in Goodachari.

Yet another biggest advantage of the film is the excellent editing as scenes have been cut in a superb manner and give you a good cinematic experience. Same is the case with the background score which is the best in the recent times as it takes the film to another level. The way the father-son angle is written is top class. Along with the racy episodes, the film is filled with an underlying emotion which is executed well.

Even though Supriya looks perfect in a serious role, her character should have been given more depth. Once the suspense is revealed, things become slightly predictable during the pre-climax.

Goodachari is high on technical aspects as it is made with top class production values. The camera department takes the cake as the visuals are slick and showcase the locations in a grand manner. The film moves to various countries and all the locations have been captured well. Production design is perfect as the RAW set up has been recreated in a superb manner.

Coming to the director Sasi Kiran Thikka , he has narrated the film in a gripping manner without any lag. He packs superb elements and this is where the film clicks for the audience.

If Adivi Sesh’s Kshanam gave a new edge to the thriller genre, Goodachari is a notch higher and showcases that there are makers in Tollywood who can dream big and make films on an international level. Goodachari is filled with edge of the seat moments and riveting thrills which will keep you entertained. As the film is made on a compact budget, it will make merry at the box office because of its universal appeal. If you ignore the slightly slow second half, you can happily enjoy this popcorn thriller which is filled with ample twists and turns..