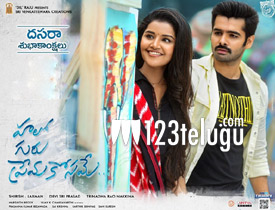 Hello Guru Prema Kosame needs to click at any cost for Dil Raju as he is going through a bad phase with back to back flops. He has pinned all his hopes on this romantic drama which has hit the screens today. Let’s see whether it lives up to all its expectations or not.

Sanju(Ram) is a happy go lucky youth who comes to Hyderabad for his job purpose. There he starts living in his uncle’s(Prakash Raj) house and falls in love with his daughter(Anupama).

But Anupama does not know about this and treats Sanju as her friend. The twist in the tale arises when his uncle comes to know about Sanju’s love story and tries to protect his daughter. Rest of the story is as to how Ram makes Anu fall in love with him and also convinces her father.

The first half of the film has good entertainment. Credit should go to Trinadh Rao for narrating this part with very good comedy. The scenes between Ram and Pranitha have been executed quite well and look breezy. All the comedy scenes during this part have been nicely injected into the proceedings.

Whenever Ram plays the boy next door characters he is at his very best. The same happens in this film as he underplays all his emotions and gives a settled performance. Though Anupama does not get much screen presence, she looks beautiful in all her scenes and does her role convincingly.

Pranitha gets a cute role and looks lovely in the office setup. Not to forget Prakash Raj, the entire second half is dependent on him and the star actor is very good with his funny and emotional dialogues during this time. Amani is adequate in her role and so were all the supporting cast.

As there is a lot of entertainment in the first half, one would expect the same in the later part as well. But that is not the case as the film gets emotional slowing down the pace a bit.

Yet another major drawback of the film is that the romantic thread between the lead pair is below par. Some more interesting and romantic scenes between Ram and Anupama should have been added to make the love story more effective.

The way Anupama reveals her love looks forced and is not that effective. Story wise there is absolutely nothing new to look forward to.

Production values by Dil Raju are just about okay. The camera work is decent and showcases the film in a decent light. Music by DSP is not up to his standards and is just passable. Background score is routine and so are the dialogues. Editing is adequate as the film has been narrated on a crisp manner.

Coming to the director Trinadh Rao, he exactly knows the audience pulse and narrates all his films with good entertainment. Here, he has taken a very simple story written by Prasanna and executes it in an enjoyable manner. The story is not deviated and the fun factor is maintained nicely. If he had made the love track and climax a tad better, the output would have been even better.

When it comes to romantic drama’s the stories are mostly one and the same. But if they are narrated in an entertaining format, things work most of the time. The same happens with Hello Guru Prema Kosame as the director has made the film with good fun and enjoyable elements throughout. Barring the predictable emotions and routine climax, this film has clean entertainment that will click with the audience during this festive season. Go for it.