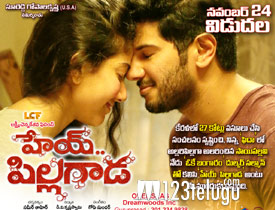 Malayalam hit film Kali has been dubbed in Telugu after a year’s gap with the title Hey Pillagada. Dulquer Salman and Sai Pallavi play lead roles in the film which has hit the screens today. Let’s see whether it impresses the Telugu audience or not.

Hey Pillagada is all about a short-tempered guy called Siddharth (Dulquer Salman), who often gets into trouble due to his short temper attitude. Meanwhile, on a road trip with his wife Anjali(Sai Pallavi), Siddharth gets into a huge argument with her and gets himself embroiled with a dreaded gang. What is that issue? How did it turn into a violent incident? To know this, you have to watch the film on the silver screen.

The lead pair’s performance is a major advantage for the film. Dulquer Salman, who impressed the Telugu audience with his performance in Ok Bangaram has once again done justice to his role as a short-tempered guy. His acting in some key scenes brings a lot of depth to the proceedings.

Sai Pallavi’s acting is also natural and apt to the film’s mood. Especially, her acting in crucial pre-climax and climax sequences will make the audience to get involved in the film. The last fifteen minutes of the film has good thrilling elements.

One of the major drawbacks of the film is its slow paced and typical Malayali style narration. Those who expect commercial elements like comedy track and nice songs will get completely disappointed.

Most of the film runs on the lead pair and you will hardly see other characters which may not go well with the larger section of Telugu audience. All those who want to see Sai Pallavi in yet another energetic role will get disappointed a bit.

Director Sameer Thahir has chosen a simple point and executed it decently with some engaging moments. If he would have added commercial elements like comedy and some romance, the result could have been much better. His typical Malayali style narration may not appeal to the Telugu audience. Cinematography by Gireesh Gangadharan is good as he handled the night shots well. Editing by Vivek Harshan is decent. Gopi Sundar’s music is good as his background score for a few crucial scenes is impressive. Production values for this dubbing film are good.

On the whole, Hey Pillagada is a simple story of a guy who lands in trouble because of his short-tempered attitude. Though the main lead’s performance brings depth to the proceedings, lack of commercial elements and slow-paced narration may disappoint the Telugu audience who are used to some popcorn entertainment. All those who are desperate to watch Dulquer Salman and Sai Pallavi’s chemistry on screen, they can give this film a shot but we warn you in advance that there is no romance as shown in the posters of the film.