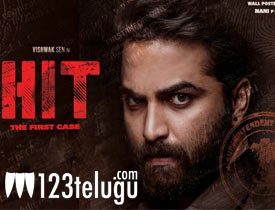 Nani’s second production, HIT has hit the screens today. Let’s see whether it has anything interesting going it’s way.

Vikram(Vishwak Sen) is an aggressive cop who has a painful past. One fine day, a girl named Preeti gets kidnapped and Vikram is involved in the case. Things become even crazier when Vikram’s girlfriend, Neha(Ruhani Sharma) also gets kidnapped in the very same way. The rest of the story is as to how Vikram solves this case and nabs the culprit.

The theme of the film looks good and has been given a unique setup which is realistic. Ruhani Sharma is neat in her role but she did not get to do much. Her chemistry with Vishwak Sen is good.

The investigation scenes have been showcased with a lot of detail and they look good in the first half. Murali Sharma is good in his brief role. Hari Teja did well in her tense role.

The interval bang is good and the way each of the key factors in the story are linked looks good. The BGM needs a special mention as it elevates things quite well. It was good to see Bhanu Chandar after a long time on screen.

Last but not the least, Vishwak Sen is the life and soul of the film. He had a difficult role to play but the talented actor carried the tense tempo through the end and proved that he is a versatile actor. Vishwak was very good in all the investigation scenes.

One of the biggest drawbacks of the film is that is lengthy. The runtime is quite long and this makes the audience a bit itchy as to when the big twist will be revealed finally.

The climax should have been handled even more effectively as it ended on a simple note which does not create any effect. Scenes related to Hari Teja and her investigation should have been reduced.

Any thriller generally has several twists and turns but HIT does not have many of them. It is more of a investigation film which is like solving a puzzle rather than giving the audience an adrenaline pumping effect.

The camera work of the film is top notch and the texture given to the visuals is quite good. As said earlier, the BGM is amazing. The dialogues and production design look neat. A lot of detailing has gone into the film and this shows on screen in all the investigation scenes

Coming to the director Sailesh, he has done an okay job with the film. His detailing is good and the way he unleashes all the key factors in the case is good. But if you see them cinematically, there are not many crazy twists or edge of the seat moments created by the director.

On the whole, HIT is a suspense thriller which has some interesting investigative scenes. The suspense has been maintained till the end and Vishwak Sen is top notch in his role. But the film is lengthy and misses the needed twists which all thrillers have. Overall, its a decent attempt and can be watched for it’s passable thrills.