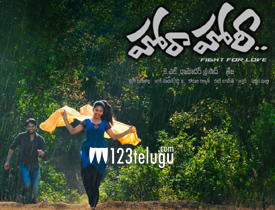 Maverick director Teja, is lying low as some of his previous films have not fared well at the box office. His latest presentation is Hora Hori which has newcomers Daksha and Dileep as the lead pair. After a huge round of promotions, this film has hit the screens today. Let’s see how it is.

Basawa(Chaswa) is a dreaded gangster who falls in love with Maithili(Daksha). He keeps spoiling all her marriage proposals and these terrible incidents take a toll on Maithili’s health completely.

In order to make things better, Maithili’s brother shifts her to a small village in Karnataka. There, she falls in love with a small time businessman Skanda(Dileep). Twist in the tale arises when Basawa comes to the same village and finds out about Maithili and her love affair.

What will the couple do now ? How will they win their love ? That forms the rest of the story.

Major plus point of the film is the female lead Daksha. She is definitely a find and will go a long way in her career. Daksha looks beautiful and carries wonderful emotions throughout the film. For a newcomer, she is quite good and all her scenes with Dileep have come out well.

Kalyan Koduri’s background score is yet another asset of the film. It is because of his captivating score the film is elevated to a decent level. Production values are good and the fresh visuals look captivating. Hero Dileep does an ok job for his first film but sadly, he does not get enough scope to perform.

First half has some gripping moments and certain comedy scenes featuring Jabardasth Raghava and Rakesh evoke decent laughs. Both the comedians try to salvage the film with their histrionics. The main villain Chaswa plays his part well and has the potential to go all the way.

In some of his recent interviews, Teja revealed that Hora Hori is like a rehash of Jayam which is absolutely true. But sadly, it is a very outdated attempt which does not have the required elements. After establishing the villain’s character so strongly during the beginning, Teja dilutes his role and makes it non effective.

The film has a roller coaster effect and after every interesting scene, the proceedings take a severe beating with some routine and boring scenes. Even though the film has enough emotions, they are not carried through till the end. You feel let down with the predictable screenplay and Teja’s routine narration.

Camera work is stunning as the locations and rainfall effect have been showcased wonderfully. Production values are quite good as the film’s set up is decent. Teja’s screenplay is a huge let down as the film falls flat with some outdated and routine scenes.

Music by Kalyan Koduri is superb as all the songs have been composed and shot well. Editing is below par as the film is a tad too long for a simple plot. Teja could have made the proceedings crisp, instead he narrates the film in his own pace and spoils the essence of the story.

On the whole, Hora Hori has an interesting premise and is good only in bits and pieces. Other than the pleasing visuals and captivating background score, the proceedings are let down by a routine story, slow narration and a very cliched climax. If you have watched Jayam, then Hora Hori is exactly on those lines but the catch here is that it is very outdated and can be ignored safely this weekend.