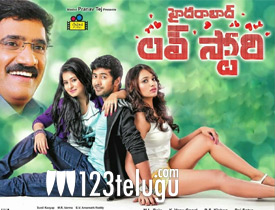 Continuing the trend of low budget films, yet another film which has hit the screens today is Hyderabad Love Story. Let’s see how the film turns out to be.

Bhagya Lakshmi(Reshmi Menon) falls head over heels for Karthick(Rahul Ravindran). She tries hard and somehow wins over Karthick. When everything seems to be going fine between the couple, Karthick’s ex-lover, Vaishnavi(Jia) come into the scene and disrupts the love story. Why did Vaishnavi come back into Karthick’s life? What problems did she create for Karthick? and how does he come out of this mess? That forms the rest of the story.

Yet again, Rahul Ravindran shines in his role of a class lover boy. The talented actor once again carries the film on his shoulders with his settled performance. Rahul’s performance is very good during all the emotional scenes in the second half. He is one actor who is yet to get his due in Tollywood as he gives his best in every film of his.

Reshmi Menon also does a decent job in her role. The second half is where the actual story begins. Rahul’s backstory, his family values and the way all this is showcased in a decent manner. The friendship angle showcased and the emotion derived from it looks good.

As the story unfolds only in the second half, the first half is quite simple with nothing much going its way. The story of the film is quite weak and routine. As the film unwinds itself, the proceedings get bogged down with slow narration.

Even though Rahul tries hard to salvage things with his performance, the weak scenes and lack of depth in the screenplay side track the film. The director fails to generate basic emotions between the pair as there is not much chemistry between them. There is no proper justification for the film’s title.

Music by Sunil Kashyap is just about okay. Editing my M R Varma is average and so was the camera work. Production values from S N Reddy were pretty good. Coming to the director Raj, he has done a half-hearted job with the film. Even after having a seasoned performer like Rahul Ravindran, he narrated the film on a pale note and did not manage to hold the audience attention with his disappointing narration.

On the whole, Hyderabad Love Story is the same old story which you have seen many a time. The only respite is hero Rahul’s sincere performance and his flashback which has some decent moments. Apart from this, the film has nothing romantic to offer and ends up as just another routine love story this weekend.