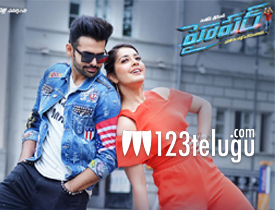 Energetic hero Ram, is back on track after the success of Nenu Sailaja. After a brief gap, he has now come up with a typical masala entertainer Hyper. The film which is directed by Santosh Srinivas and stars Raashi Khanna has hit the screens today. Let’s see how it is.

Surya(Ram) is a carefree youth who is obsessed about his dad Narayana Murthy(Satyaraj). This love for his dad lands Surya in trouble all the time. Things take an ugly twist when a powerful minister(Rao Ramesh) locks horns with his dad who is a sincere government officer.

Things get to a point where the minister is hellbent on getting a file signed by Surya’s dad. As Narayana Murthy stands firm on his values and does not sign the file, the minister starts targeting his family. Rest of the story is as to how Surya takes things in his hands and saves his dad from this chaos.

One of the biggest assets of the film is the entertaining narration. Credit should go to Santosh Srinivas for narrating the story in a very interesting way. The entire first half has good entertainment and the way the conflict point is induced through a twist is very good. The social message that is given through the film is very good. It has been conveyed well by the powerful dialogues.

Hyper is a tailor-made film for Ram and he does a superb job. Performance wise, Ram’s energy levels are brilliant and suit the film completely. All his confrontational scenes with Rao Ramesh are superb. The punch dialogues, comedy, and conflict that is generated through these two characters is pretty good.

Once again, Rao Ramesh takes this film to another level with his performance. It is his role that generates a lot of interest for the audience. Satyraj is perfect in his role and brings depth to the proceedings. Raashi Khanna provides the necessary eye candy to the film through her glamor.

Things get a bit bogged down during the second half as the powerful character of Rao Ramesh is made slightly over the top and funny. Raashi Khanna is nowhere to be seen except for the songs.

This film does not have many thrilling elements in the second half as the proceedings get predictable after a point. The love track between Raashi and Ram does not hold much importance. At least one song in the first half could have been avoided.

Production values by 14 Reels are very good as the film has some very fresh and rich visuals. Credit should go to the cameraman for showcasing Vizag in a splendid manner. Music by Ghibran is just about okay.

Background score by Mani Sharma is below average. A better score could have elevated the film even more. The screenplay is a huge asset as most of the film runs through an interesting thread. Coming to the director Santosh Srinivas, he has done a decent job with the film. His writing is innovative and the way he showcases the conflict point through Satyaraj’s role is good. Had he made certain areas in the second half tighter, things would have been even better.

On the whole, Hyper is a typical masala entertainer which has some entertaining moments. The interesting narration, Ram and Rao Ramesh’s confrontational scenes and a breezy first half are a huge assets. The film is bound to do well among the masses and the holiday season will surely help the film. If you ignore the slight glitches and predictable storyline during the second half, Hyper makes up for a decent watch this weekend.