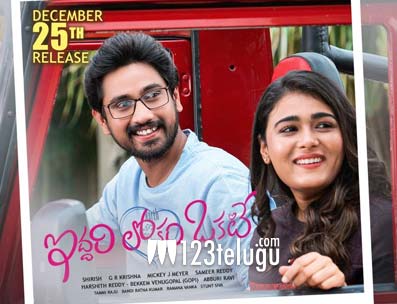 Iddari Lokam Okkate is a do or a die film for Raj Tharun as he has pinned a lot of hopes on this movie to save his career. The romantic drama produced by Dil Raju has hit the screens today and let’s see how it is.

Mahi (Raj Tharun) and Varsha (Sahalini Pandey) are childhood friends who meet after 25 years. Very soon, they get close and start liking each other. The couple decides to propose to each other but because of a health scare featuring Mahi, things fall apart all of a sudden. What is this health scare? What problems did it cause to the story? and do the couple get united at the end forms the rest of the story.?

Shalini Pandey is the highlight of the film as she gets a key role and performs quite well in it. She looks gorgeous as Varsha and shares good chemistry with Raj Tharun. As most of the story is dependent on her, she gets more screen time.

Raj Tharun plays a subdued lover in the film. As he is an ill-health person, we get to see him in a very calm manner. This aspect of his character, Raj Tharun has showcased it well through his eyes. Rohini is neat as the heroine’s mother. Raja was good in his supporting role.

The last ten minutes of the film have been showcased well and the twist that comes during this time is handled nicely and ends the film on an emotional note. The music by Mickey J Meyer is also good.

The biggest minus point of the film is the storyline which does not have any novelty. There are many films in Hindi and English which have such a concept. Apart from this, the biggest culprit of the film is the pace. The director makes us yawn in may areas as he takes forever to enter the main story.

The lead pair do not even have much interaction during the first 20 minutes as childhood scenes keep coming in time and again and spoil the mood of the viewers. Apart from this, the narration is so jaded that one gets a feeling as to why the director is not hurrying up things.

The situation gets better in the interval but post that the director once again wastes time and brings grip in the proceedings only in the last ten minutes. There is no entertainment or good romance in the proceedings and this is where the film goes down terribly. The makers should have highlighted the hero’s health scare more in the first half and should have made it intense. Everything happens only in the end which is too hurried up.

Music by Mickey J Meyer is good as all the songs go well with the narrative. Production values by Dil Raju are good. The camerawork is good as the film has a good color tone and it suits the mood of the film. Dialogues are ok and Shalini Pandey has been styled quite well. Editing is a big drawback as close to 7 minutes during the beginning should have been trimmed to make things better.

Coming to director Krishnareddy, his thought process of ending the loving the love story in a particular way is good, but he should have added some fun, good romance right from the start of the film to make the climax look believable. There is no scene to show the pain that the lead pair are feeling for each other. The manner in which he handled the climax was good.

On the whole, Iddari Lokam Okkate is an old school romance that has a few moments here and there. The slow pace and predictable nature of the film bring the proceedings down. However, an emotional climax and lead pair’s chemistry makes things interesting. Watch it at your own risk and be ready for the dull romance.