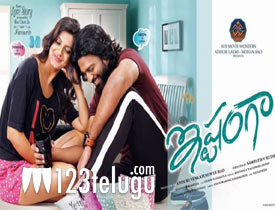 Continuing the trend of low budget films, yet another movie which has hit the screens today is Ishtamga. Let us see whether the film has anything interesting in store for us.

Krishna(Arjun Mahi) is a playboy who does not believe in marriage and serious relationships. On the other hand, Satya(Tanishq Rajan) is a content writer who falls head over heels on Krisha. Things become even interesting when the couple gets involved physically. After this, Satya becomes even more serious and proposes marriage to Krishna. But to her shock, he rejects her and decides to leave abroad. Rest of the story is as to how Satya changes Krishna and wins his heart forever.

The entire film is focused on Krishna played by Arjun Mahi and he gets a meaty role. His character has been handled well and Arjun does justice in his role of a playboy who is not serious.

Coming to the heroine Tanishq, she looks good and also did her emotional role well. Some of the key romantic scenes showcased between the lead pair have been executed well.

The story idea of the film is ages old and has nothing new to offer. Girl falling for a guy, he cheating her and how she gets him back has been showcased in many movies earlier.

The proceedings have no clarity whatsoever and do not make sense for the most part. The conflict between the lead pair and what reason the hero gives to avoid her is outright silly. Comedy by Priyadarshi and Duvvasi Mohan evokes irritation for the audience.

Music by Mahavir is decent and so was his background score. The camerawork is superb as the film is showcased in a rich light. Editing is okay and so were the production values. Coming to the director Sampath, he has done a disappointing job with the film. His narration is wayward, has no clarity and whatever he has showcased is routine and age-old romance which we have seen hundreds of time.

On the whole, Ishtamga is a very old school romance which has nothing going its way. There are some romantic scenes which create interest but the rest of the proceedings make you so impatient that you start looking at the exit door while watching this film. All we suggest you is to stay away from this film and look for something better this weekend.
123telugu.com Rating : 1.5/5