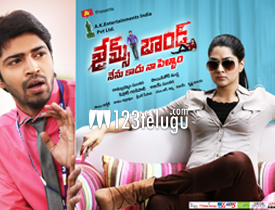 Allari Naresh needs a desperate hit to get back in the reckoning. He is back with yet another comedy caper James Bond which has hit the screens today. Let’s see whether it gives Naresh a much needed break.

Nani(Allari Naresh) is a simple down to earth software employee. He and his family hate getting into problems and lead a very simple life. Twist in the tale arises when he gets married to a lady don Bullet(Sakshi Chowdary) without knowing about her past and criminal activities.

Half way through his marriage, Nani comes to know about his wife’s original background and decides to leave her and run away from the city. Rest of the story is as to how Nani manages to deal with these tricky situations and solves all his problems.

As usual, Allari Naresh is quite good in his role and showcases superb comedy timing. He is back to what he does the best and entertains the audience. Naresh looks good and all his scenes with Sakshi Chowdary have come out quite well. Sakshi Chowdary gets a meaty role and looks her part.

Comedians Saptagiri, Jaya Prakash Reddy and few other artists have done a decent job. First half of the film is quite entertaining. 30 Years Pruthvi is hilarious during the interval bang. Second half has some decent comedy moments and has enough elements which will be liked by the masses.

Praveen, Jabardasth Raghu and Ashish Vidhyarthi have done their roles well. Dialogues written have enough punches and the production values are pretty good. Some fights picturized on Sakshi are sleek and elevate her character well.

You cannot say it as a drawback but the story of the film is quite routine and predictable. Even though Sakshi Chowdary looks her part well, she needs to work on her expressions more. An unnecessary mass song in the second half looks a bit vulgar and could have been edited out.

Run time of the film is a bit long as many scenes could have been easily removed. Certain scenes featuring Jaya Prakash Reddy and his group have been stretched out unnecessarily.

Climax is routine and has nothing new to offer. Certain songs in the second half cause hindrance to the flow of the film. Jiva’s role has no weight and so is Posani’s character.

Production values are quite good in the film. The makers have not compromised on the quality of the film and have given it a rich feel. Music is decent by Sai Karthik and so is his background score. Editing is weak as ten minutes of the film could have been edited out. Screenplay is decent but gets a bit wayward in the second half.

Coming to the director Sai, he has done a good job with the film and has not experimented much. Even though there is routine comedy, the way he has etched it out is good. The place where he falters is after a few interesting scenes, the film starts getting off track.

On the whole, James Bond is a decent film from Allari Naresh. He sticks to his basics and entertains the audience well. While the interesting first half is fun, the second half gets quite routine. All those who are done watching the heavy duty Baahubali and are looking for a simple time pass entertainer, James Bond will not disappoint you.