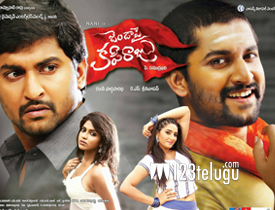 Nani’s Janda Pai Kapiraju, which was waiting to see its release light has finally hit the screens today. Also starring Amala Paul, this film is directed by Samutrakani. Let’s now see how it is.

Aravind(Nani) is an honest young man who opposes injustice and corruption. He goes to any extent to do good for the society and often lands corrupt people behind bars. One fine day, he decides to encounter the corruption in government offices and collects key evidence against a minister and few other officers.

He also files a case and manages to reveal the corruption. Upset by this, the evil minister decides to counter attack him and introduces Aravind’s look alike named Maya Kannan. Rest of the story is as to how Aravind manages to deal with all his problems and send the corrupt behind bars.

Nani’s character of Maya Kannan in the second half is the major highlight of the film. You will see a new dimension in Nani’s acting as he will surprise you with his power packed performance. His body language, dialogue delivery and the way he portrays the negative shades are too good. For the first time in his career, Nani has done a double role and he excels in both of them.

Story idea is quite novel and the way director Samutrakani has narrated the social message is also good. The last 20 minutes prior to the interval are engaging and have been executed quite well. Amala Paul is wonderful as the girl next door. Ragini Dwivedi gives able support to Maya Kannan’s character.

Sarath Kumar is perfect in his cameo and so is Shiva Balaji as a TV reporter. Vennela Kishore manages to bring in a few laughs in the first half. The court episode during the climax has also been showcased well.

Major drawback of the film is the first 20 minutes. Story of the film is dragged to unnecessary extent as the proceedings take time to unfold. The love track between Nani and Amala Paul is below par and becomes a road block during the first half. As the film is message oriented, entertainment levels are a bit low. Even though there are only two songs they could have also been chopped off.

Camerawork in the film is top notch as all the visuals have been showcased wonderfully. G V Prakash’s background score elevates the film to another level. As said earlier, many unnecessary scenes could have been easily edited. Action episodes could have also been designed a lot better.

Coming to the director Samudrakani, he has done a decent job with the story but has added unnecessary commercial elements which stops the flow of the film freely. Sashankh Vennalakanti’s dialogues are pretty decent.

On the whole, Janda Pai Kapiraju is a film which Nani will be extremely proud of. He impresses us in two diverse roles and gives a commendable performance. Interesting social message, interval bang are basic assets. If you manage to sit through the lengthy and unnecessary commercial episodes, you might end up liking this hard hitting film.