Review : Jawaan – Fight for the nation 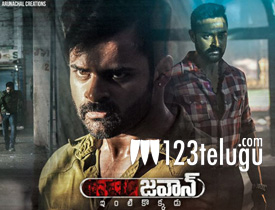 Jawaan is one film which has been in the making for quite some time now. After a heavy-duty round of promotions, the film has hit the screens today. Let’s see how it is.

Jai(Tej) is a sincere youth who at any cost wants to get into the prestigious DRDO organization. But to his bad luck, he gets rejected and carries on with his life. This is also the time when Jai’s childhood friend Keshava(Prasanna) who is a dreaded criminal plans a huge robbery of a missile which is being launched by the DRDO. Just when things seem to be going fine, Jai obstructs the robbery and creates more problems for Keshava. Rest of the story is as to how Keshava and Jai fight for the ultimate weapon.

The basic idea of the film is interesting and has been set nicely amidst two close friends. Sai Dharam Tej leads from the front and gives his career-best performance. Tej excels in his role and is superb in all the emotional scenes in the film. His dances are very good and he has shown tremendous growth as an actor and carries the entire film single-handedly.

Mehreen provides the necessary eye candy and looks cute in the film. Prasanna, who played the main villain is stylish and does a very good job. But sadly, his role is not elevated that well. The way tej handles all his family problems and put his country on the front has been showcased well.

The second half of the film is where the actual action starts as the cat and mouse game between the hero and villain catch up big time. The way villain sets up Tej and his family by staying close to them has been showcased well. Thaman’s background score and music are also pretty impressive.

The film’s first half is a bit weak. Things start on a simple note and the entire DRDO set up is not showcased that effectively. The robbery plan of the missile and how it is stopped by Tej have been shown on a very silly note.

There are no strong emotions which connect you to the film. Even though Prasanna does well, his thread is not executed aptly. You do not get a feeling that he is up to something so big as the setup and push up scenes do not create that impact whatsoever.

The climax is outright silly and has nothing new to offer. During the first half things are not built up well and when they look good during the second half, they are ended on an unimpressive note. One can say that the film does not have proceedings or effect which are needed for a subject which has a patriotic feel.

The look of the film is just about okay. The DRDO set up and the entire terrorist activity around it has been re-created on just an ordinary note. Production values are average but the camera work was decent. Locations chosen for the film are quite new and look good on screen. Lyrics of the songs are pretty nice and so was Thaman’s music. Editing is apt and looks neat.

Coming to the director BVS Ravi, he has put in some half-hearted approach to the film. Though he has written the storyline quite well, his execution is below par. There is nothing great to rave about in the film as a good sequence is followed by some silly and boring elements. He has failed to create the depth which a patriotic film needs and showcases the film in just an ordinary note.

On the whole, Jawaan is the story of a man who fights for his nation. Though the storyline of the film is good, it is the half-baked execution which leaves a lot to be desired. Things are left to Sai Dharam Tej’s brilliant performance and he single-handedly rallies the film till the end. There are no entertaining elements which will get you kicked but at the same time, the film offers some decent thrills here and ends up as a passable watch this weekend.