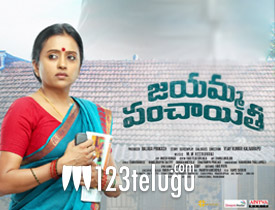 Suma Kanakala has made a strong comeback with her new film Jayamma Panchayati. The film is out today and let’s see how it is.

Jayamma(Suma) lives with her husband Gauri Naidu(Devi Prasad) and kids in a small village. One fine day, her husband falls sick and a lot of money is needed for his treatment. Left with no choice, Jayamma goes to the panchayat heads and asks for justice. Will the bench hear Jayamma’s pachayati? Will her husband be saved? How did she handle all these tensions alone? That forms the rest of the story.

The backdrop of the film is quite interesting. The small town set up, innocense in the characters and bonding between family have been established quite well.

A few emotional scenes between key characters will move you. Suma makes an impressive comeback to the big screen after a long time. She gets the innocense of her character right and gives a sincere performance.

The supporting cast also do a good job in their roles. Devi Prasad who plays Suma’s husband also does well in his role. The tongue in cheek humor is brought well in a few scenes featuring Suma.

One of the major drawbacks of the film is the director takes a lot of time to enter into the main plot. Even after the story starts, there are hardly any twists or hard hitting scenes that bind the audience. The film is devoid of any commercial elements and looks quite bland.

Because of this, the entire first half becomes quite dull and slow. The establishment of the characters looks good but after a point, they have no depth in their existence. A lot of characters are underused creating no depth to the film.

Music by MM Keeravani is just about okay and nothing great. But his BGM was effective. The dialogues are neat and so was the camera work showcasing the small town set up.

Coming to the director Vijay Kumar, he has done a disappointing job with his narration. The film lacks the punch and needed drama. Also, the dull pace and lack of engaging moments spoil the fun for the audience.

On the whole, Jayamma Panchayati has a decent backdrop but is marred by dull narration. The film lacks a solid conflict point and is narrated in a dull manner. Barring Suma’s sincere performance and a few emotions, this film has nothing much to showcase.