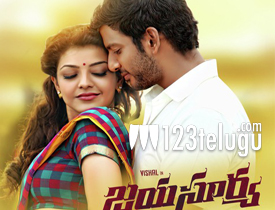 Vishal’s latest Tamil flick, Paayum Puli is dubbed in Telugu as Jayasurya. Directed by Suseenthiran, this movie has hit the screens today. Let’s see how it is.

Jayasurya(Vishal) is a dutiful police officer who is appointed as the ACP of Guntur on a special task. He starts his mission of nabbing a dreaded gang who is threatening the local businessmen. One fine day, he meets Soumya (Kajal Aggarwal) and falls in love with her.

As time passes by, Soumya’s dad is suddenly killed by a powerful politician named Siva (Samuthirakani). Who is this Siva ? Why did he kill Sowmya’s dad ? and What does he have to do with Jayasurya ? To know answers to these questions, you need to watch the film on the big screen.

Vishal gives a power packed performance which is the major highlight of the film. He carries good emotions through out the film and displays stunning energy levels during the action episodes. Soori, who played Vishal’s sidekick, lends good support and evokes decent laughs with his funny dialogues.

Despite a less screen time, Kajal Aggarwal and her glamour quotient is a big attraction in the film. Samuthirakani’s role has good variations and he did a fabulous job as the antagonist. The interval block is executed pretty well and the second half is filled with some engaging scenes which will have a good affect on the audience.

The first half of the movie is a big let down as the movie proceeds with aimless narration till the interval block. The misplaced songs and many unwanted scenes test the patience of the audience.

Some characters in the film have no firm establishment and can easily be edited out. Many scenes lack the intensity which is a must for these type of movies. There is no entertainment in the second half which is yet another setback for the film.

The climax of the film is dragged out a bit and could have been trimmed by at least fifteen minutes to make the film engaging. The predictable plot is also a big minus for the film.

D.Imman did a splendid job with his background score but his music didn’t suit the Telugu nativity. Cinematography by Velraj is nice. Editing by Anthony is not up to the mark as many scenes could have been removed. Dialogues written by Shashank Vennelakanti are good and suit the mood of the film.

Suseenthiran’s script work and direction are OK but he fails badly in handling the screenplay. He should have worked more on the narration to make this film a bit more gripping.

On the whole, Jayasurya is interesting only in bits and pieces. Vishal’s powerful performance, interval block and some interesting scenes during the second half are basic assets. But the boring first half and some unwanted scenes spoil the flow of the film and make Jayasurya just a below average action drama.