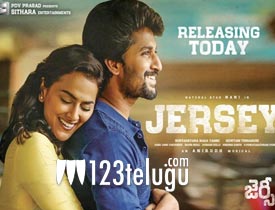 Nani has been super confident about Jersey right from the day it was launched. Directed by Gautam Tinnanuri, this film has hit the screens today. Let’s see how the film turns out to be.

Arjun(Nani) is an ex Ranji player who leads a depressed life with his wife Sara(Shraddha Srinath) and son Nani. This life style of his does not go well with Sara and especially his son who at a crucial moment edges Arjun to do something in life and become his real life hero. Rest of the story is as to how Arjun changes his life style and embraces cricket back and becomes an inspiration for many.

Jersey is a film which has some of the best performances in recent times. Every character in the film is so well enacted that you get carried away with all the emotions throughout the film.

Nani is loved by one and all when he does relatable roles and the same happens in Jersey. He gives his career best performance as Arjun and drains you emotionally throughout the film. The pain he showcases is superb. Be it the scenes where he goes to the railway station and brings out his joy after getting selected or the manner in which he handles scenes related to his son with the Jersey, Nani was exceptional and gave an award winning performance.

Shraddha Srinath makes a solid debut and looks like a super performer. The manner in which she showcases different variations in her character is amazing. Her chemistry with Nani was too good. The small kid who played Nani’s son was decent. Satya Raj once again plays a pivotal supporting role and he is best with his emotions.

What makes Jersey so special are the realistic emotions. Director Gautam should be praised highly for keeping the emotions real which will connect to many. The manner in which the film goes back and front in time has been showcased well. Also, the climax is superb as the manner in which the twist is revealed is good and leaves you teary eyed.

The length of the film is a tad long and there is a chance for the film to be trimmed for at least 8 to 10 minutes.

The second half of the film is also good but becomes a bit predictable when the cricket is showcased. Routine cricket scenes bring the pace down a bit.

Though Anirudh and his songs sound normal, they fit perfectly in the narrative. His BGM is on another level as the elevates the emotions completely. The production design needs a special mention as the different time frames have been showcased superbly.

Lyrics are meaningful and so were the dialogues which are realistic and on point. Production values of the film are really good and camerawork is amazing as the middle class set up and Ranji matches have been shown superbly. Shraddha Srinath has been designed quite well.

Coming to the director Gautam Tinnanuri, he showed glimpses of his brilliance in Malli Raava but his game in Jersey is on another level. Without falling prey to the commercial aspects, he narrates the story of a loser with such beautiful emotions that every member in the family can relate to. The twist he has chosen and the manner in which he uses it to narrate the goal of the hero is so well thought. He is an amazing talent and Jersey will put him in top bracket for sure.

On the whole, Jersey is a realistic sports drama which moves you emotionally. Nani once again proves what an actor he is and single handedly takes the film to greater heights. Realistic narration, relatable characters, great performances and above all, honest emotions will make your heart heavy. If you ignore the slightly slow pace, this film will be liked by one and all and makes for a great watch as honest films like Jersey come rarely. Watch it without fail.