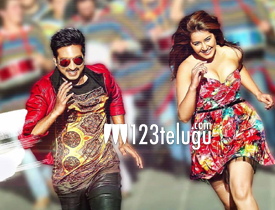 Action hero Gopichand, is back with yet another stylish entertainer Jil. Starring the beautiful Rashi Khanna, this film is directed by debutante Radha Krishna and has hit the screens today. Let’s see how it is.

Jai(Gopichand) is a sincere fire officer who leads a happy life with his family. He falls in love with Savitri(Raashi Khanna) and spends some cozy time with her. Twist in the tale arises when a underworld don Chota Naik(Kabir) crosses paths with Jai.

A small misunderstanding between the two of them ends up into a huge war. Rest of the story is as to how Jai solves his problems and overcomes the mighty Chota Naik.

U V Creations are always known for making stylish films and Jil is yet another feather in their cap. It is probably one the most stylized films to have come out in the recent times. Right from the introduction of the main characters to the way the songs have been shot, every thing looks stupendous.

Gopichand looks his career best and has been showcased in a stylish manner. He has a powerful role which he plays it with a lot of ease. All his confrontation scenes with the villain have been dealt superbly. Rashi ups her glamour quotient and plays her bubbly role wonderfully. She is the major attraction in all the songs and has been styled wonderfully.

Yet another major highlight of the film is the villain Kabir. He looks menacing and does his negative role impressively. All the songs look beautiful and are a added bonus to the film. First half of the film is decent and has some engaging moments. All the comedy scenes between Gopichand and his aunt played by Urvashi are hilarious.

Major drawback of the film is the weak story line. There are no major twists or turns as the film runs on a single point agenda. The story only takes off during the interval as the director gets things going with a small twist.

Second half is a bit predictable and does not offer anything new. After a heavy duty build up of the confrontation scenes between the hero and the villain, the climax is let down and hurried up. Posani and Prabhas Seenu’s comedy track in the second half gets boring and has been dragged unnecessarily.

Jil is high on technical aspects. Major credit should go to the camerawork which presents the film in a superb light. All the songs have been designed wonderfully, and especially those shot in the beautiful locales of Spain look spectacular. The Spanish locations have been showcased like never before and give an added edge to the songs. Ghibran’s music is the major highlight and will become the talking point of the film. Dialogues are decent and so are the lyrics.

Special mention should go to the costume designers who have done a wonderful job. Coming to the debutante director Radha Krishna, he has done a decent job in his debut film. He concentrates more on the look and feel of the film but slightly misses out on the content. The way he has executed the romantic track and elevated the villain is good but he looses steam by the end because of his weak story line.

On the whole, Jil is one of the most stylized films that has come out in the recent past. Stunning visuals, peppy music and decent performances are basic assets. If you end up bearing the routine story and a predictable second half, you can definitely watch the masala entertainer this weekend.