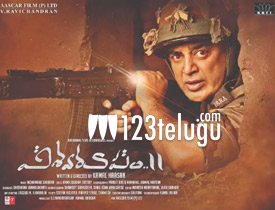 After a gap of 5 years, Kamal Haasan’s Vishwaroopam 2 has finally hit the screens today. Let’s see if the film lives up to all its hype or not.

The story continues after the end of the first part where Wisam Ahmed(Kamal Haasan) successfully cheats the dreaded terrorist Omar(Rahul Bose) and helps the US army in defusing a deadly bomb in New York.

After successfully completing this mission, Wisam is assigned yet another task in the UK. He along with his wife Nirupama(Pooja Kumar) leave for his mission. But to Wisam’s shock, Omar is still alive and has planned something big in India this time around. Rest of the story is as to how Wisam leads from the front and saves his country.

Kamal Haasan, like in every film of his does a great job in his role of a RAW agent. He looks dashing even at this age and does action sequences with ease. Pooja Kumar gets a meaty role and is good as Kamal’s wife. Andrea is apt as the female cop and does well in all the action sequences.

The first half an hour of the film has some thrills and action sequences look good. Rahul Bose is good as the main villain. Wahida Rahman adds depth to certain scenes in the film. The romance between Kamal Haasan and Pooja is quite good and their thread has been narrated in an interesting manner.

Vishwaroopam 2 will be a full toss for all those who have not seen the first part as it is hard to understand what is going on with the story in the first half an hour inspite of good thrills. Kamal should have made it a bit easy for the audience to understand the story line.

The screenplay goes for a toss and the narration has no flow at all after the first half an hour. The scenes jump from one set up to the other and confuse the audience. The second half has absolutely no thrills at all.

The moment you feel that there is a heavy duty climax coming on, things are wrapped up in a hurry. The hierarchy of the army bosses is not shown clearly as many people keep coming into the scene one after the other. Lastly, the massive action episodes which were a highlight of the part one are missing completely here.

Coming to the director Kamal Haasan, he has done a disappointing job with the sequel. Instead of making it bigger and better, he has just dragged the simple story further and created another assignment for his cop character. Apart from showcasing some thrills in the first half an hour, Kamal makes the later part weak and wraps up things in a tizzy.

On the whole, Vishwaroopam 2 is a disappointing sequel which has nothing going its way. It’s confusing, lacks proper screenplay and does not have the expected popcorn action sequences which were a highlight of the first part. As the sequel was made years before, the story and narration lack the contemporary touch. All those who want to see the legendary Kamal Haasan on screen after a long time can try this film out but the others can take this action entertainer easy and look for something else.