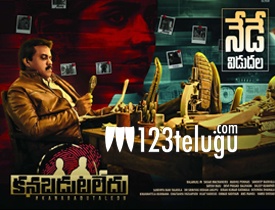 Continuing the trend of reviewing low-budget films, one more film which has hit the screens today is Kanbadutaledu. Let’s see how it is.

Sashida(Vaishali Raj) is unhappy with her marriage with Aditya(Yug Ram) because her boyfriend(Sukranth Veeralla) cheated on her and she was forced to marry Aditya. One fine day, she decides to kill Surya and involves her husband also. They leave for Vizag and shockingly find out that Surya is missing. What happened to Surya? Why is he missing? and where does Sunil feature in this setup? That forms the story.

The film starts off on a good note and builds up the suspense well in the story. Heroine Vaishali Raj is good in her role and does well in her emotional scenes.

Things get interesting in the second half once Sunil’s entry happens. The film picks up pace and Sunil does well as a detective. All his scenes and the way he investigates the story look good.

Himaja was impressive in her role. The way she goes about her character and showcases her negative shade is done well and Himaja looked pretty as well. Kireeti also does well in a negative role and has a good screen presence.

After starting the film on a good note, the film falls flat in no time. The love story that comes in later has no depth and seriousness. The characters, dubbing, and performances of the supporting cast look horrible.

Yet another bigger drawback is that the characters are not established well. None of the key characters have a proper connection to the story and are left alone during the key investigation time. Kancharapalem Kishore is horrible with his overaction and the dubbing given to him is even worse.

Though Sunil does well, his character has been given too much importance. The cops are kept aside and Sunil being, a small-time detective handles the case like a boss, and this looks odd.

The production values of the film are decent but the editing is bad. The camerawork is just about okay but the screenplay is bad. Music is disappointing and BGM was worse.

Coming to the director Balraju, he has done a pretty disappointing job with the film. The story idea is good but Balraju’s execution is worse. He made the first half go down in no time and makes some sense in the second half. But it is too late by then.

On the whole, Kanabadutaledu is a film that has a good plot but is spoilt by some disappointing execution and worse dubbing. Sunil makes some sense in the second half but that is not enough to save the film from sinking.