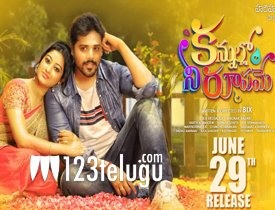 Amidst half a dozen small films, a film titled Kannullo Nee Roopame has also hit the screens today. Let’s see how it is.

Sunny(Nandu) falls for a girl called Srushti(Tejaswini Prakash) and decides to make her his better half at any cost. After a few trials, Sunny somehow wins her love. The twist in the tale arises when an unexpected incident creates major differences between the couple. What is that unexpected incident and how did it affect the couple? and finally, how did the lead pair solve all their problems? To know this, you have to watch the film in the theaters.

Nandu, who played the main lead is decent in his role. His performance is good in emotional scenes and brought depth to the proceedings to an extent. Heroine Tejaswini Prakash as the girl next door is good and did justice to her role as a sensitive person. Senior actor Posani did a decent job in his given crucial role.

A few situational comedy scenes between the hero and his friends in the first half are nice. Comedian Fish Venkat and his gang evoke a few laughs here and there. One melody song which comes in the second half was picturized beautifully.

The film takes off with an interesting scene but gets diluted in no time with the same old-school narration and boring proceedings. Looks like director BIX had a good message to convey but sadly, none of his trails succeed as the film’s tempo falls down with an uneven and flat screenplay.

He takes his own sweet time to reveal the suspense element in the film which is also yet another setback for the film. Soon after the suspense is revealed, things get even worse as the suspense factor looks unbelievable and over the top. One more drawback of the film is that it has many illogic scenes which literally diverts the audience mood.

As said above, director BIX fails completely with his execution part as there is no grip in his narration. Editing work is disappointing. The cinematography is decent as a few natural locations are captured well. A melody song with comes in the second half is canned well. Music by Saketh Komanduri is okay as two songs in the album are good. Production values for this low budget film are decent.

On the whole, Kannullo Nee Roopame is a regular love story with an over the top and silly twist in the tale. Though a few emotional scenes and lead pair’s performance are good, the lackluster proceedings and uneven screenplay will test your patience to the core. All we suggest you is to skip this film and look for better options as there are a number of films which have released today.