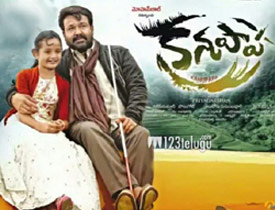 Complete actor, Mohanlal, who tasted success with his last release Manyam Puli, has once again greeted the Telugu audience with Kanupapa. Directed by ace director Priyadarshan, this movie has released today. Let’s see how it is.

Jayaram (Mohanlal) is a visually challenged man who works as a lift operator in an apartment. He has a rare ability to recognize people just by listening to them. Meanwhile, a retired judge Krishna Moorthy (Nedumudi Venu), who resides in the same apartment, believes in Jayram and shares all his secrets with him. Unexpectedly, Krishna Moorthy is killed by a serial killer called Vasu (Samuthirakani).

Who is Vasu and why did he kill Krishna Moorthy? What life secrets did Krishna Moorthy share with Jayaram? Who are Sree Devi (Vimala Raman), Ganga (Anu Shree) and Nandini (Baby Meenakshi) and how do they enter the proceedings form the rest of the story.

Undoubtedly, Mohanlal is one of the major highlights of the movie. He gives an impressive performance as a visually challenged man and carries the entire movie on his shoulders without dropping the intensity in his character. Even though there is nothing new to offer in the story, the director succeeded in running the movie with a gripping screenplay.

Mainly, the first half of the movie passes on with some interesting moments and revealing the main theme at the interval is good. The second half continues the momentum with some engaging mind game episodes between the hero and villain.

The twist that comes during the climax is superb. Along with Mohanlal, other supporting characters like Samuthirakani, Vimala Raman, Baby Meenakshi and Anu Shree give decent performances. Compared to the first half, the second half’s narration is very engaging.

Touted as a crime thriller, the movie has its flaws here and there. Mainly, the pre-climax scenes look a bit stretched. Even though the runtime of the movie is similar to that of regular movies, we feel as if we are watching a long duration movie.

A Sangeeth song which comes in the proceedings diverts the mood of the film to an extent. Some unnecessary scenes that come in the first half can be easily chopped off. People who expect regular commercial elements may feel disappointed with this film.

Director Priyadarshan, who has nationwide reputation as a good filmmaker has lived up his expectations. Govind Vijayan’s story is good and so is the screenplay which is written by Priyadarshan.

Background score composed by Ron Ethan Yohaan brought life to the film. Out of the 4 compositions, two songs are very impressive. Cinematography by N.K.Ekambaram is brilliant. Editing by M.S.Ayyappan Nair is adequate. Production values of the movie are good.

On the whole, Kanupapa has once again proved that a normal story can reach good heights with a perfect star cast and racy screenplay. Mohanlal as a visually challenged person will impress the audience completely. Even though the crime factor and a gripping narration for the most part of the film make Kanupapa interesting, we need to see how this film will be received by the general audience.