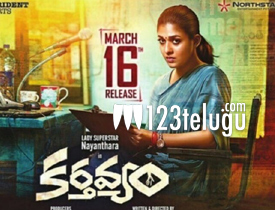 Lady Superstar, Nayanthara’s critically acclaimed Tamil film, Aramm has been dubbed in Telugu as Kartavyam. Touted to be a social drama, the film has hit the screens today. Let’s see whether it impresses us or not.

Varshini(Nayanthara) is a sincere IAS officer who takes up the challenge of rescuing a four-year kid who falls into a bore well. In this process, Varshini also comes across some unnoticed and political issues which are causing problems in the rural areas where she is deployed. She decides to sort all these issues and the rest of the story is as to how she goes all out and saves the kid and also changes the system for good.

As expected, Nayanthara is a major plus to the film. She literally lived in her role of a sincere government official and acted with a lot of ease. Being a commercial heroine, Nayan should be appreciated for accepting this unique script which addresses a core issue.

The film has a very realistic approach without any deviations. The last ten minutes of the first half and interval episode are executed well. Especially, the pre-climax sequence and the rescue operation scenes are narrated on an intense note.

All the family members, who were showcased as poor and backward citizens did a good job in their given crucial roles. The ending which hints us of a sequel with strong political content looks good.

Though the film is straight to the point and narrated on a convincing note, it lacks proper commercial elements which may not appeal to the regular audience. Those who expect some good entertainment and glamour from Nayanthara may get disappointed as the film runs on a serious note.

Nayanthara resigning from her reputed post at a crucial conflict point has not been addressed properly. If the director would have handled those episodes quite effectively, things would have been a lot better.

Director Gopi Nainar shines in addressing a social issue and interlinking it with various burning problems in the rural areas. His intention and questioning the loopholes in the system will make us think for a while. Music by Ghibran is apt for the film’s mood and his background score brings a lot of depth to proceedings. Production values for this limited budget film are good.

Cinematography by Om Prakash is superb. As the core film happens in a remote village, he succeeded in bringing the rustic texture in every frame. Editing by Ruben is good as he kept the film’s run time short and crispy.

On the whole, Kartavyam addresses a burning issue in a very straight forward and gripping manner. Nayanthara’s commandable screen presence and director’s intention to expose loopholes in the system are impressive. But the film clearly lacks the regular commercial elements and this might no go well with the regular entertainment-seeking audience. All those who like films which are serious and thought provoking, this film is surely worth a watch this weekend for its unique storyline.