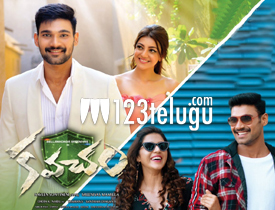 Kavacham has been promoted quite a lot in the past few days. The film directed by Srinivas Mamilla has hit the screens today and let’s see how it is.

Vijay(Bellamkonda Srinivas) is a sincere police officer who loves Samyukta(Kajal) and wants to marry her. But after a point of time, she disappears from the scene. This is also the time when Vijay saves a lonely girl(Mehreen) from a kidnapping. But his sincere efforts turn upside down as he gets framed in the kidnapping. What is this conspiracy? Who is behind it? and where has Samyukta disappeared all of a sudden? To find out all the answers, you need to watch the film on the big screen.

Bellamkonda Srinivas does well in his role of a cop. He gets a meaty role and as expected, is very good in the action sequences. He is very good during the climax fight and his scenes with Mehreen have come out well.

Kajal has a crucial role but does not get to emote much. She looks lovely in the songs and does what is expected of her throughout the film. Mehreen lands a key role and she is the one who brings the key changes in the film. She is okay in her role but needs to work on her expressions.

Neil Nitin Mukesh is good as the main villain and takes over the film in the last half an hour or so. Posani was good as the corrupt cop and so were Satyam Rajesh and Mukesh Rishi. The interval bang is the highlight and has been handled quite well.

Except for the interval bang, the entire first half is weak. The director has written a good interval bang but he failed to initialize the story in a proper manner. Even after one hour into the proceedings, there is no clarity about the story. What you see is many unnecessary scenes between Kajal and Srinivas which do not have any interest.

As the interval bang is elevated well, one would think that the film would rake up good speed in the second half but that does not happen. The director complicates the twists so much that many characters are introduced one after the other and make the runtime even longer.

In one word what could have been a good cat and mouse game between the hero and villain with one basic and interesting twist is slowed down with way too many subplots.

As in every Bellamkonda film, production values of the film are top notch. The locations, action sequences, and chases are very good. Once again Chota K Naidu shows his experience as he gives the film a rich light. Thaman’s music is below par but the background score is decent enough. Fights composed look good on screen and will please the masses. Dialogues are decent and the styling done for Kajal is very bad in the talkie part.

Coming to the director Srinivas, he makes just an okay debut with Kavacham. His story on paper is good but his inexperience in narrating the thriller is seen in the first half. Had he made this part well and narrated the film on a simple note, things would have been even better.

On the whole, Kavachm is a typical cop drama which works in parts. The interval twist is interesting but the narration could have been even better in the first half. The film has some elements to please the masses but for the A center and multiplex audience, this film will be another routine entertainer. If you are the ones who do not mind loud cop dramas with massy episodes, give this film a shot. But the rest go in with low expectations as there is nothing new you will see here.