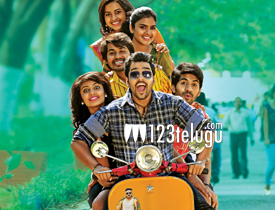 Dil Raju started his career by producing some youthful entertainers. He is now back with yet another fun flick Kerintha. Directed by Sai Kiran Adavi, this film has hit the screens today. Let’s see how the film turns out to be.

The story of the film is quite simple and based on the lives of three young college going couples. Each one of them have a love story of their own and spend some precious times together in the college.

Things take a u-turn when they face the harsh realities of their respective lives and decide to part ways. Rest of the story is as to how these three couples reunite with each other and achieve their goals in life.

One of the biggest asset of the film is the performance of the lead cast. All the actors did a wonderful job in their respective roles. Sumanth Ashwin has improved by leaps and bounds and gives a subtle performance. Sri Divya is an apt choice for her role and brings in a lot of depth to the film. The love track between Sumanth Ashwin and Sri Divya has been handled quite well.

Tejaswini gets a different role for a change and does exceptionally well. She showcases mature emotions and is quite endearing in the film. The actor who played Nookaraju has done complete justice to his role. First half of the film is fun filled and showcases some youthful moments.

The actress who played Bhavana’s role is definitely a find and has done a superb job. The last fifteen minutes of the movie has some very good emotional moments. Pragathi is very good as the dominating mother. Songs are yet another asset of the film.

Major drawback of the film is that it lacks some fun elements. If the makers could have added some decent entertainment, the output would have been even better. Even though one tries hard, you cannot ignore the happy days effect in the film.

Yet another de-merit of the film is its predictable nature. Right from the word go, you exactly know what is going to happen next as you have seen it in many films. Pace of the film drops a bit after the interval as some routine scenes take center stage.

Music by Mickey J Meyer is pretty good but his background score is just about average. Lyrics are impressive and gel with the mood of the film. Production values are good and the camera work captures the college atmosphere pretty well. Editing is quite sleek and so is the art direction.

Coming to the director Sai Kiran Adavi, he manages to infuse decent emotions in the film but suffers from tag of novelty. There is nothing new which you have not seen before. The way he has handled characters and extracted emotional performances from his lead cast is superb.

On the whole, Kerintha has some decent elements going its way. A simple set up, decent performances from the lead cast and some emotions are basic assets. If you go in with low expectations and forget the predictable nature of the script, you can give this film a shot for its exuberance and practicality.