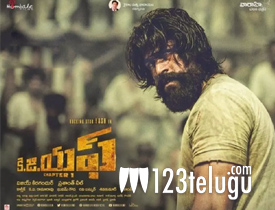 Yash’s, KGF is one of the most awaited films in South India. With good expectations and solid pre-release buzz, the film has hit the screens today. Let’s see whether it lives up to the hype or not.

Determined to emerge as a rich person, Rocky(Yash) leaves his native village in his childhood and lands in Mumbai. Soon after landing there, Rocky grows step by step and becomes a notable name in the crime world. This is the time when Yash gets an offer from Bangalore to kill a big wing from the Gold mining area, KGF. Who gives the offer to Rocky? What will Rocky do to face that mighty personality? How is the KGF area connected to Rocky’s childhood? To know this, you have to watch the film on the screen.

Star hero Yash is the biggest asset for the film. His stylish looks and mass mannerisms are a treat to watch on the screen. The amount of hard work he has put in to deliver the best in action sequences is quite impressive.

The hero introduction and two action blocks which come during the latter half of the film are designed nicely with mass elevations. Heroine Srinidhi Shetty is cute and performed decently in her limited screen presence. Milk beauty Tamannaah’s glamour show in a special song will attract the youth audience.

Apart from Yash’s energetic screen presence, the film has a slow-paced narration which is a major drawback for the film. Initially, after a few hero buildup scenes, the audience will be eagerly waiting to know what the film is all about but director takes his own sweet time to unveil the plotline.

Once again, after the core point is revealed in the second half, the proceedings become dull with flat narration until the pre-climax which is another minus for the film. All the characters which come into the story do not have proper justification.

Lack of commercials elements like comedy and eye candy duets between the lead pair will also disappoint the audience big-time.

Director Prashanth Neel totally misused the given opportunity as he failed to deliver a good product. Having a star hero in hands, Prashanth should have done wonders using Yash’s popularity but he limited it to a few built up shots. If he would have concentrated more on script and narration, the result would have been much better. Production design and the artwork is nice as the sets in KGF are super impressive.

Editing work by Shrikanth is okay but he could have trimmed the second half close to fifteen minutes. Cinematography by Bhuvan Gowda is good as he captured the rustic look of KGF area nicely. Music is not up to mark as no song in the film has a proper tune. Background score is okay. Production values for this high budget film are good.

On the whole, KGF does not live up to the colossal expectations laid upon it. The film is a regular crime drama set up in an interesting backdrop. Yash’s screen presence and stylish looks are good but the lack of interesting storyline and slow-paced narration makes it a boring watch this weekend.