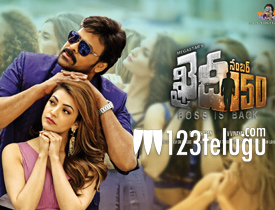 Khaidi No 150 is probably one of the most awaited films in the recent times. One can easily say that no film has created such a buzz as Khaidi as it is Chiranjeevi’s comeback film after nine long years. The masala entertainer has hit the screens today and let’s see how it turns out to be.

Kaththi Seenu (Chiranjeevi) is a happy go lucky crook who escapes from jail and plans to leave the country for good. One fine day, he comes across an accident and helps the man who gets affected by it.

The twist in the tale arises when Seenu finds out that the man(Shankar) he saved is the exact look a like of him. He cleverly sends back Shankar to jail in his place and silently enters his life to earn more money.

There, he comes to know that Shankar’s life is miserable as he is the only man who is helping the downtrodden farmers of his village. Upset by this, Seenu decides to own Shankar’s problems and launches a huge fight against the corporate companies who are behind all this. How does he solve all these problems forms the rest of the story?

The first thing which comes to your mind once you start watching the film is, did Chiru really take a nine-year-old gap. Right from the first frame, he impresses you big time. Even after all these years, Chiru’s screen presence, comedy timing, and performance have not gone down one bit.

Be it his crazy dialogues or stunning dance moves, everything will make mega fans quite happy. Chiru’s performance during the emotional scenes and climax bring a lot of depth to the film. Kajal looks gorgeous in the film and nicely suits the frame with Chiru. Not once do you feel that the pairing looks odd.

The first half of the film is quite breezy with a thumping interval block. Credit should also go to Devi Sri Prasad for giving a superb music score as all the songs will be hugely loved by all. Especially, the situation turns euphoric during the last song where Charan makes an entry.

One can easily say that the villain is a huge weak link for the film. Probably, a better star actor should have been a good match for Chiru’s star power. There are no solid confrontational scenes between the hero and the villain which would have elevated the film to another level.

As said earlier, Devi rocks big time with his music. The icing on the cake is his background score which elevates the film to a decent level. Special credit should go to DOP Ratnavelu for capturing Chiru in a stunning way and makes you go in disbelief that Chiru is actually a 60-year actor. Dialogues by Sai Madhav Burra are massy and give the front benchers some happy moments. Production values by Ram Charan are top notch. He has not compromised one bit for the film as the song locations and visuals look top notch.

Styling done for Chiru by his daughter Sushmita is superb as the mega star looks quite young and carries all the vibrant colors nicely. Special mention should go to all the choreographers who have done a superb job in the songs. Each song has some stylish moments and Chiru brings the house down on fire with his signature steps.

Coming to the director Vinayak, he has done a wonderful job with the film. Kudos to him for adapting the remake according to Chiru’s stature and presenting him in a way which fans were missing from a long time. Right from Chiru’s performance to showcasing the farmers’ problems, Vinayak has narrated the film in a decent way. Had he tightened the second half and wrapped up the climax quickly, the effect would have been even better.

On the whole, Khaidi No 150 is a typical mass entertainer. The film is set to take record openings and has everything that we expect from a star hero like Chiranjeevi. He makes a thumping comeback and proves that even at this age he can give every star hero a run for their money. If you ignore the predictable story line and dull climax, Chiru’s one man show, superb songs, and a good message makes this film a good watch this festival season.