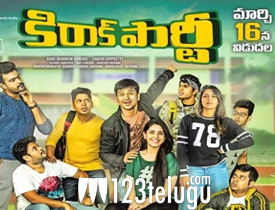 Young hero, Nikhil has been promoting his new film Kiraak Party quite aggressively from the past few days. The college drama has finally hit the screens today. Let’s see how it is.

Krishna(Nikhil) is a happy go lucky engineering student who spends a mischevious life along with his group of friends. He falls in love with his senior Meera(Simran) and when everything seems to be going fine, a tragic incident changes Krishna’s life upside down. Rest of the story is as to how Krishna manages to solve all his problems and comes out as a successful student and sincere human being.

Kiraak Party is Nikhil’s one-man show. It is Nikhil’s emotional performance which clicks for the film. Nikhil is shown in two different shades and the young hero impresses in both his avatars. The way he transforms from a simple guy to a strong student leader is quite good. Nikhil is very good especially in the last fifteen minutes of the film where he showcases diverse emotions.

The first half of the film has some decent college fun with good songs keeping things light even though there is not much story. The last 20 minutes of the film is quite emotional and ends things quite nicely.

Heroine Simran does a decent job in her role. The college set up, the student’s rivalry and the regular fun which every college has is showcased in a decent manner.

One of the biggest drawbacks of the film is that there is no strong storyline. The conflict point that is showcased does not elevate the proceedings much. Hero suffers a huge setback because of the heroine and this changes his life. There should have been some strong scenes between the lead pair to showcase the above-said pain that the hero suffers in the latter half.

The first half an hour in the second half is quite bland and does not have any interesting episodes. The second heroine Samyuka Hegde looks weak and a better heroine should have made things quite better for the audience.

The bonding between the friends should have been showcased in an even stronger manner. Comedy quotient which is a must for college flicks is slightly missing in this film.

Production values by AK Entertainments are quite good as the college backdrop has been showcased richly. The camerawork is also pretty good as the youthful visuals are quite pleasing to the eye. Dialogues are decent and so was the music. The background score was also decent but the editing should have been a tad better as the film is quite lengthy in its runtime.

Coming to the director Sharan Kopishetty, he has done a decent job with the film. Though he does not create any rib-tickling comedy or great romance between the lead pair, he presents the film on a decent and passable note. Even though he fails to establish things in the first half, he makes it up during the last half an hour as scenes featuring hero’s realization end the film on a good note.

On the whole, Kirrak Party is a youthful college drama which has some good moments in the second half. Nikhil leads from the front with his brilliant performance and saves the film completely. This film is clearly aimed at the youth and they should connect to all the various happenings in the college life which are shown well. If you ignore the below par story and lack of rib-tickling comedy, this film ends up as a decent watch this weekend. Just keep your expectations in check.