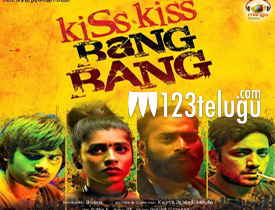 Kiss Kiss Bang Bang is one film which has created a good buzz with its teasers. The suspense thriller has hit the screens today. Let’s see how it is.

Aryan(Kiran) is a media personnel who is fed up with his live-in girlfriend(Harshada Kulkarni). He asks her to get out of his house but she doesn’t bother to listen to him. Upset by this, he leaves the house himself and the next thing he knows is that he gets entangled in a brutal murder involving a prostitute(Gayatri Gupta). What happened to Kiran? How did he get involved in the murder case? What is this chaos all about? To know the answers, you need to watch the film on the big screen.

One of the basic plus points of the film are the production values. Even though the film is made on a budget of 40 lakhs, it looks quite rich. The way the makers have maintained a dark theme in the film looks good at times.

Some suspense elements and the way they are revealed in the second half look good. Some scenes which showcase the nightlife of Hyderabad have been executed well. Coming to the performances, Gayatri Gupta is the best of the lot as she gives a decent performance in her role. Heroine Harshada provides the necessary eye candy.

One of the biggest drawbacks of the film is the entire first half. As all the scenes are interlinked and are only cleared during the second half, the build-up scenes are quite horrible and over the top.

A simple break up scene in the first half is dragged to no extent and irritates the audience. The director takes forever to enter into the main plot and the film is ended on a very silly and hasty note confusing the audience.

Mahesh Kathi hams to no extent in his role of a boss. Yet another drawback is the use of too many cuss words which look over the top in many areas.

As said earlier, the production values of the film are pretty good. Camera work needs a special mention as the color palette that has been used suits the mood of the film quite well. The background score of the film is pretty impressive as it elevates the proceedings quite well. Editing is adequate and so was the entire set up.

Coming to the director Karthik Medikonda, he has done just an okay job with the film. He has put a lot of emphasis on the styling and look of the film and tried to make it hard-hitting and realistic. But in this process, his narration takes a beating as he executes the film in uneven and abrupt manner.

On the whole, Kiss Kiss Bang Bang is a cheesy thriller which tries hard to be different. The dark theme of the film is good but too much usage of cuss words and unnecessary hard-hitting scenes make the audience uncomfortable. Except for some suspense elements in the second half, this film has nothing much to offer and is only suitable for the adult audience.
123telugu.com Rating : 2.5/5