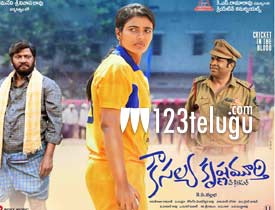 Kausalya Krishnamurthy is a film which has been talked about a lot for the past few weeks. The remake is directed by Bheemineni Sreenivas and has hit the screens today. Let’s see how the film is.

Krishnamurthy(Rajendra Prasad) is a cricket fanatic who watches cricket all the time. Whenever India loses, he gets disappointed a lot. Seeing her dad’s love towards cricket, Kausi(Aishwarya Rajesh) at an early age decides to become a cricketer and make her dad proud. But how will a poor and backward girl from a small village become an Indian cricketer forms the main crux of the film?

The film is a remake of the hit Tamil film Kanaa and director Bheemineni has done justice to the film and made it on a faithful note. The main star of the film is Aishwarya Rajesh and she has done a very good job in her role. Right from her acting to her cricket playing skills, she has showcased everything in a very natural manner.

Rajendra Prasad as Krishnamurthy is very good and brings a lot of depth to the film. He as the ailing farmer brings in good emotions into the narrative. All his scenes with his daughter have been nicely executed and bring a lot of depth.

Off late, Jhansi is getting good roles in Telugu and once again, she gets a meaty role and does supremely well. She as the frustrated mother of Kausalya is very good. The cricketing episodes showcased in the film are authentic and look natural. Shiva Karthikeya’s cameo looks good.

The film takes too much time to enter into its main story as a song and childhood scenes take forever to complete. Also, yet another drawback of the film is that it is a mixture of several sports dramas which have been made in the past. The only difference here is that the protagonist is a female.

The emotions of farmers look good in the movie but they are dragged for no reason. The second half has mostly cricket coaching scenes and they are showcased a bit too much which increase the runtime unnecessarily.

The basic conflict point and Kausalya’s actual reach to the top have not been showcased properly. Within just on scene, she gets selected to the world cup squad and this looks a bit odd.

Production values of the film are top-notch as the village visuals have showcased well by the camera department. The production design of the film is superb as the international matches, the authenticity of the game and players look realistic. Editing of the film is just about okay as the film can be chopped by at least ten minutes. Music is impressive but the background score is even better. Dialogues are emotional and especially those written for Rajendra Prasad are very good.

Coming to the director Bheemineni, he is a master of remakes and here too, he has done a decent job. He does not tamper the story much and deals with the film with a scene to scene remake. He also creates emotions in the family but drags them way too much from the beginning. If he had made the films crisp, things would have been crisp.

On the whole, Kausalya Krishnamurthy is an emotional sports drama which has some good moments. Decent family emotions and some interesting cricketing scenes are basic assets. On the flip side, the lengthy runtime, predictable sports-based storyline play spoilsport. If you are okay with these small issues, you can easily give this inspiring film a shot this week.