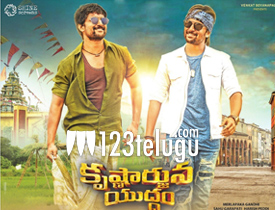 Nani is going great guns in his career with back to back hits. Next in line is Krishnarjuna Yuddham which is directed by Merlapaka Gandhi. The film has released today on a massive scale and lets see how it turns out to be.

Krishna(Nani) is a happy go lucky youth from Chittoor who falls in love with Riya(Ruksar Mir). He spends quality time with her and right when the couple accepts each other’s love, Riya goes missing. On the other hand, somewhere in Prague, Krishna’s look alike, Arjun(Nani) is a pop singer who tries to woo Subba Lakshmi(Anupama). Upset with Arjun’s behaviour Subba Lakshmi leaves to India but she too goes missing as soon as she lands in Hyderabad. Rest of the story is as to how Krishna and Arjun cross each other’s paths and find their respective lovers.

Krishnarjuna Yuddham is a film which showcases Nani as a complete mass hero. He is exceptional as Krishna and gives an impressive performance. The way he spoke the Chittoor slang and extracts comedy through his character is very good. The way his love story is narrated and the manner in which Nani performs all his love scenes with Ruksar is quite interesting.

Ruksar Mir looks decent and also performs well in her role. Mahesh Vitta, who played Nani’s sidekick elevates good comedy with his dialogues. His conversations with Nani have been showcased in a hilarious note.

The first half of the film is quite good with Nani’s two parallel tracks being showcased in a decent manner. Brahmaji’s comedy is good in the first half and evokes decent laughs. Songs are yet another plus point in the film as they sound well and have also been shot nicely.

Some interesting romantic scenes should have been added for Nani and Anupama’s track to make things better. After a fun-filled first half, the film completely changes track and becomes a kidnap drama.

Even though the mass fights look quite impressive on Nani, they have been stretched a bit too much during the climax. A song that comes at a crunch situation in the second half could have been avoided completely.

Also, yet another major drawback of the film is that there is no strong villain. A solid actor and some scenes with both the Nani’s fighting him out could have made a lot of difference.

Production values of the film are quite good as the village set up has been showcased in a wonderful manner. The camerawork is okay as Prague and its surroundings are not utilized properly. Music by Hip Hop Thamiza is pretty good and his background score also helps the film in a big way. Dialogues written in the Chittoor slang are quite nice and give a lot of depth to Nani’s role. Editing is strictly okay as many elevation scenes for Nani could have been slightly trimmed.

Coming to the director Gandhi, he has done a decent job with the film. He makes the first half quite interesting as his screenplay of narrating the two stories is impressive. But things change from the second half as the entertaining film becomes a predictable kidnap drama with not many praiseworthy scenes. There is no proper villain and conflict point during this time as things become easy for Nani who end things on a simple note.

On the whole, Krishnarjuna Yuddham is an out and out Nani film from start to end. Nani’s stardom is in full flow as he becomes this mass hero who entertains you with his powerful performance. Impressive first half and good comedy are basic assets of this film. But the weak second half and a lengthy runtime put breaks on the free flow of the film. As it is the holiday season and keeping Nani’s superb craze in mind, this film should satisfy those who are looking for a typical popcorn entertainer this holiday season.