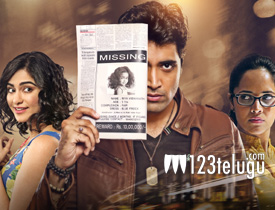 After all the hype and interesting promotions, the Adavi Sesh, Adah Sharma and Anasuya starrer, Kshanam has finally hit the screens today. Let’s now see how this thriller turns out to be.

Rishi(Adavi Sesh) is an investment banker settled in the US. One fine day, he gets a call from his ex-girlfriend Swetha(Adah Sharma) and rushes back to India to meet her. Upon his arrival, Swetha reveals a shocking truth to him that her daughter has been kidnapped.

A curious Rishi approaches the cops but to his surprise, they do not cooperate with him at all. He then decides to start finding the girl all by himself and comes across many shocking truths during his search.

What problems does he face during his search ? What truths does Rishi find out ? and will manage to trace out the little girl ? That forms the rest of the story.

Undoubtedly, the heart and soul of the film is the handsome Adavi Sesh. Right from the first frame to the last, Sesh impresses you with his emotional performance and amazing screen presence. He carries the entire film on his shoulders and proves what he is worth of. Adah Sharma gets a meaty role and performs with a lot of ease and sincerity. She is especially good in all her emotional scenes.

Anasuya makes a confident and shocking debut with Kshanam. She puts aside her charm and glamour and gels well in her role of a cop. She was very convincing during the climax and is an actress to watch out for. Other surprise of the film is Satyam Rajesh, who is superb as a frustrated cop. He excels in his character and shocks you with his acting capabilities. Satya Dev underplays his role quite well and ably supports the film.

Interval bang of the film is spot on and sets up the pace for the rest of the proceedings. Credit should also go to Adavi Sesh for penning such a unique story which is quite new for Telugu films. Vennela Kishore and Ravi Varma are also quite good in their cameos. The way all the twists and turns are narrated in a racy manner is what clicks with Kshanam.

There are certain threads which are not explained clearly. The way Anasuya’s character goes about dealing with important situations could have been showcased even more convincingly.

Also, once gets a feel that the suspense is dragged a little bit during the second half. This is not the film where you expect some popcorn entertainment and all those who seek that will be disappointed. A song during the first half could have been edited out to make things even racy.

Kshanam is one of the technically strong films in the recent past. Even though it is made on a shoe string budget, the production values are superb and credit should go to PVP for backing up a project like this. Camera work by Shaniel Deo is top notch and showcases the film in a engaging mood. A special mention about the music director Sricharan Pakala, who has given a thumping background score which lifts the film decently. Screenplay by Adavi Sesh and Ravikanth Perepu has a few glitches here and there.

Coming to the director Ravikanth Perepu, this young man has impressed with his debut film. The new age director has narrated the film in a gripping manner and did not shy away in showcasing some hard hitting twists and turns. What makes his work appreciable is the fact that he manages to build and maintain the suspense till the very end of the film.

Off late, Tollywood is surprising us with some out of the box and sensible films. Kshanam falls in that category and does not fall for the so called commercial trap. Racy narration, suspense factor and terrific performances from the lead cast are huge assets. Barring some unconvincing points regarding the plot, Kshanam ends up as an intense and enjoyable thriller which will not disappoint you at all. Go watch it.