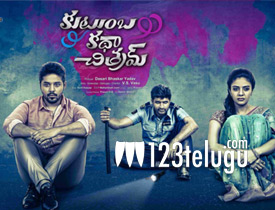 Kutumba Katha Chitram is one film which has created a decent buzz with its posters. The film has hit the screens today. Let’s see how it is.

Charan(Nandu) and Pallavi(Sreemukhi) are two software engineers who lead a mechanical life with no interest for each other. One final day, things get so messed up that they decide to get separated. Rest of the story is as to how the couple reconciles each other and get back on track.

The basic concept of the film is good. What problems do working wife and husband face in cities has been showcased through an interesting storyline. The way small time problems creep up between the couple on a daily basis has been executed quite well.

Sreemukhhi is perfect in her role and gives a settled performance. The way she has carried her complex role showcases her talent. Nandu is pretty impressive and his chemistry with Sreemukhi is also decent. Kamal Kamraju was just about okay in his role of a womanizer.

The way the story has set amidst the dream set up of the lead pair looks good only to an extent. After a while, things become lethargic and the audience knows what exactly is going to happen next.

As the film is shot in very less time, so many errors are clearly visible on the screen. Many scenes lack proper editing and have been wrapped up in a hasty note. There is no proper connection between the scenes. After a point, things get quite confusing for the audience and the end is also quite silly.

Camerawork by Joshi is pretty impressive. Production values are quite good as the film looks quite neat. Sunil Kashyap’s music is pretty disappointing. Editing is just about okay. Coming to the director Vasu, he has done a pretty disappointing job with the film. Even though he chooses a contemporary subject, his execution lacks the necessary punch. He just hurries up through the scenes and does not create any impact at all.

On the whole, Kutumba Katha Chitram is an experimental film which goes wrong in every which way. Except for the novel message that is showcased through the realistic relationship between husband and wife, this film lacks proper execution and basic emotions and ends up as a disappointing watch this weekend. Watch for other options that are available this week.