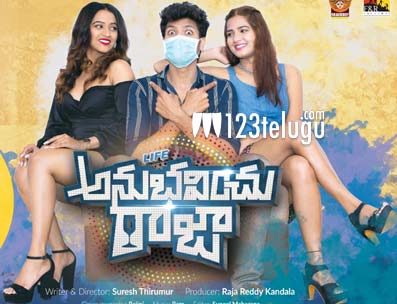 Continuing the trend of low budget films, yet another movie that has hit the screens today is Life Anubhavinchu Raja. Let’s see how it is.

Raja(Ravi Teja) is a loser in life who falls in love with Harati(Sravani). Even Harati falls in love with Raja and decides to elope with him. Right at this moment, Raja backs off. Upset with this, Harati moves ahead in life. This leaves Raja devastated and he leaves to the Himalayas. There, he meets Shreya(Shreya Shetty). He once again gives love a try and proposes Shreya but she proposes him right away. What will Raja do now? How will he win Shreya’s love? What happened to Harati? That forms the rest of the story.

The biggest highlight of the film was Raja. He as a loser in life does an extremely good job. The way he showcased his frustration in crunch scenes was good. He carried the entire film on his shoulders. Both the heroines, Shruthi Shetty and Sravani did a decent job in their supporting roles.

The songs of the film are pretty decent and especially a song which is shot in the Himalayas backdrop is pretty good. Some fun scenes have come out well and evoke decent laughs. The actors who play the hero’s friends have also done a good job in the movie. The so-called small twists have also been shown well.

The title has no connection with the storyline and this is the biggest drawback of the film. How a love failure guy makes it big is the theme of the film and this has been left alone and has not been exploited well at all.

The way the hero takes on big business tycoons has no seriousness at all in the film. A guy who is upset with life because of life falls in love instantly the moment he lands in the Himalayas looks a bit over the board and fake.

There is no proper flow in the scenes and the BGM that elevates these scenes is a nightmare. As the actors are also new, the so-called depth in the proceedings is not at all developed in the film.

The camera work is quite good for this low budget film. The way the Himalayas have been shot is good to see on screen. The production values of the film are strictly okay. Editing is pathetic as close to 15 minutes in the film could have been chopped off. Coming to the director Suresh, he has done a boring job with the film. His story is very old and the narration he has given is even older making it tedious for the audience.

On the whole, Life Anubhavinchu Raja is a boring and outdated romantic drama with very few interesting moments. The story, narration, and scenes are so routine that you might have seen them in many films before. So, leave this film alone this week and look for something interesting.