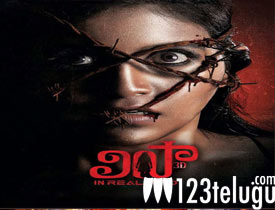 After a brief gap, Anjali is back with another film called Lisaa. The 3D film has hit the screens today and let’s see how it is.

After losing her dad at a young age, Lisaa(Anjali) is brought up by her mother. After her education, Lisaa decides to settle in the US but is upset with the fact that her mother will be left alone. So, she makes a unique plan of getting her young mother married once again. To this, Lisaa’s mom disagrees.

Left with no choice, Lisaa leaves to her grandparents’ village to get them also involved and convince their daughter to get married. Upon her arrival to her ancestral village, Lisaa gets into a lot of trouble. What is that trouble? and how does she come out is the whole story of the film.

Anjali is amazing as Lisaa and gave a standout performance. The manner in which she showcased emotions in horror scenes was very good. Surprisingly, Brahmanandam is pretty good in this film and evokes a few laughs here and there.

The pre-interval episodes which showcase the horror effect look good. The interval bang is neat and creates a decent effect. The climax is showcased on an emotional note and that looks good on screen. As the film is made in 3D, the horror effects have been executed well.

The basic flow in the film is missing in several areas. Except for some horror scenes, the rest of the proceedings are plain and boring. The director could have added even more emotions but he missed the chance.

Though Brahmanandam’s comedy track is good, it has absolutely no link with the main story. Many scenes have been only added to make the film look more commercial. The actual story enters its main plot only in the second half and by then, the audience gets bored completely.

The camerawork in the film is top notch as the visuals are captivating. VFX done for the film are also impressive. The BGM was good and same was the case with the Telugu dubbing done. Production values were ok but the editing was bad. Coming to the director Raju Viswanath, he has done a poor job with the film. Rather than showcasing the emotions and thrills, he spent a lot of time on comedy and unnecessary scenes which take the film down in no time.

On the whole, Lisaa is a boring and outdated horror thriller which has nothing going its way. Only a few thrills look good as they are executed in 3D. Unnecessary scenes, forced comedy, and dull narration create a tiring effect on the audience. Even Anjali’s standout performance does not save the film as it is way too routine and boring.